The Indian Premier League, being a cash-rich league can have its own perks for a player. When a franchise consistently gives players a long run they go on to flourish but if they do a lot of changing and chopping and drop the players after a few bad games then it can happen an impact on the players. This season it seems like Proteas fast bowler Lungi Ngidi is not happy with the treatment he’s been getting from the Chennai Super Kings franchise this season.

Talking about the ‘Whistle Podu’ franchise they have looked in horrendous touch this season. After the winning the first game against Mumbai Indians in the season opener they have gone on to lose 4 out of the 6 games the side has played.

The struggle of the Chennai Super Kings franchise is understandable since they were hit by a range of players backing out of the season. From Suresh Raina to Harbhajan Singh, the loss of such experienced players has definitely hit Chennai Super Kings which has gone on to reflect in their performance.

Not just that but Chennai’s team selection this year has also been questioned as a matter of fact that they have benched the 2019 IPL season purple cap holder Imran Tahir. Another decision is in question is of the batting number of MS Dhoni, experts are of the opinion that the World Cup-winning captain of India should bat higher up the order but this season he’s batting down as low as 7th position.

Now, Lungi Ngidi has put out a tweet what looks like is he’s expressing disappointment towards the Chennai Super Kings franchise for the treatment he’s received this year. Lungi Ngidi tweeted,

“There’s a lot of bad things that they wishing on me.”

The fast bowler had faired very decently in the two games he played for the Chennai Super Kings franchise this year. He picked up 4 wickets in two games at a strike rate of merely 12 after which he was dropped from the side after conceding those runs in the final over in that match against Rajasthan Royals in Sharjah where Jofra Archer took on Lungi Ngidi in the final over of the game.

Meanwhile, as soon as the speculations started, a lot of fans commented on Ngidi’s post. Among one of them was a comment that read, “You deserve a better IPL team bro”.  What was more cryptic about it that Lungi Ngidi also liked the post. 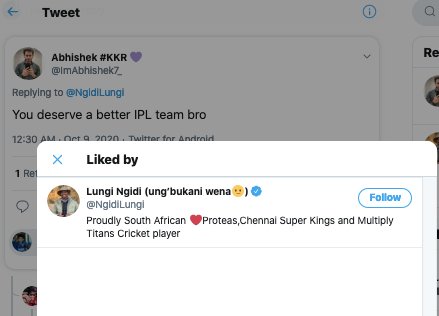