BCCI President Sourav Ganguly is likely to be discharged from Woodlands Hospital on Wednesday, as per the latest news reports in PTI. The former Indian skipper had a successful angioplasty following a mild heart attack. He started feeling unwell after he developed a sudden blackout while training at a gym session on Saturday.

A team of nine doctors worked on improving Ganguly’s health and bring it to a stable condition. After proper inspection, they have concluded that he is good to be released. Ganguly was diagnosed with a blockage in three coronary arteries.

“The medical board came to a consensus that deferring angioplasty, for now, is a safer option as Mr. Ganguly is stable, does not have chest pain, and is on optimal management,” Dr. Rupali Basu the CEO and MD of Woodlands Hospital was quoted as saying by PTI.

Along with Dr. Basu, renowned cardiologists Dr. Devi Shetty and Dr. R K Panda took part in the meeting which came to the consensus that deferring angioplasty was a safe option.

Sourav Ganguly To Be Released on Wednesday

Ganguly’s family was also present in the meeting and were informed about the further treatment plan of the BCCI President. Sourav Ganguly’s brother Snehasish Ganguly also addressed the media and in the process updated them about his brother’s health.

Sourav Ganguly is currently the President of the BCCI where he had assumed office last October as he took over from the previous president C.K Khanna. Though his term shouldn’t have been over by July 2020, since the supreme court hasn’t conveyed any decision on the same, he’s still continuing in the role.

One of Sourav Ganguly’s most successful events under his administration was the recently concluded IPL in the UAE where the board managed to earn close to 4000 crore rupees by organizing the IPL in a bio-secure bubble.

Also Read: Sourav Ganguly Undergoes Angioplasty Successfully, To Be Kept Under Observation For Next 24 Hours 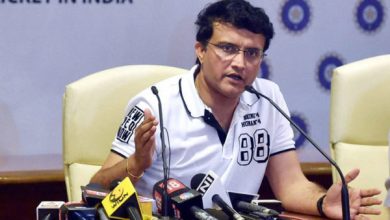 When Will Sourav Ganguly Be Released? Woodlands Hospital Reveals