The Board of Control for Cricket in India recently announced a 15-member squad for the upcoming Asia Cup 2022. The tournament will kick off on August 27 in the United Arab Emirates (UAE), with the finals to take place on September 11. Indian skipper Rohit Sharma is back in the team for the Asia Cup, along with other senior players including Virat Kohli.

Meanwhile, KL Rahul, who was out of action for several weeks will be Rohit Sharma’s deputy. Unfortunately, India’s lead pacers Jasprit Bumrah and Harshal Patel were unavailable for selection due to injuries. In their absence, Bhuvneshwar Kumar will be India’s lead pacer in the tournament.

The Asia Cup 2022 tournament will serve as preparation for the Indian team ahead of the ICC T20 World Cup 2022. They will be looking to finalize their playing combination in the tournament the mega0event in October. Some of the Indian players will be keen to put on a brilliant performance, to strengthen their case for the World Cup.

In this article, we take a look at three players whose selection in India’s T20 World Cup squad might depend on their performance in the Asia Cup: 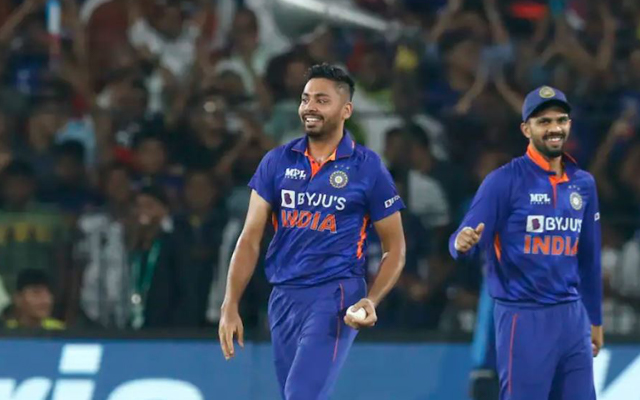 Indian pacer Avesh Khan has had a mixed start to his International career. He has done well in a few games but has proved to be very expensive with the ball. In 13 T20I matches so far, he has 11 wickets at an average of 31.81 and an economy rate of 8.67. The right arm-bowler was on the receiving end of West Indies’ batting wrath in the recently concluded T20I series.

However, Avesh Khan did make a comeback in the fourth T20I, taking two wickets for seventeen runs. He was awarded the Player of the Match for this performance. The 25-year-old has gotten an opportunity in India’s Asia Cup squad, as pace bowlers Jasprit Bumrah and Harshal Patel were unavailable for selection due to injuries.

With all-rounder, Deepak Chahar kept as stand-by for the Asia Cup, and Bumrah and Harshal as the first-choice pacers, Avesh Khan will have to pull off a brilliant performance in Asia Cup to stay in contention for the ICC T20 World Cup 2022.

Ravi Bishnoi will be part of India’s spin bowling attack for the upcoming Asia Cup 2022. He has impressed the fans and the pundits with his shrewd bowling so far in his career. His attitude of not getting bogged down even after being hit for a boundary is what stands out the most.

In nine T20Is, Bishnoi has taken 15 wickets at an average of 16.53 and an economy rate of 7.15. His best of 4/16 came against the West Indies in the recently concluded fifth T20I in Florida. The leg-break bowler’s performance in T20Is has earned him a place in the Asia Cup squad.

However, the Indian team also boasts of experienced spinners Yuzvendra Chahal, Ravichandran Ashwin, and all-rounder Ravindra Jadeja. In their presence, it will be difficult for Ravi Bishnoi to make it to India’s T20 World Cup 2022 squad. Perhaps, an outstanding performance in the Asia Cup, if given an opportunity, will boost his chances of playing in the World Cup.

Former Indian skipper Virat Kohli has not been in the best of forms. He has struggled to perform consistently in the last couple of years. This has raised a few questions from the experts about his place in the Indian squad. Overall, the right-handed batter has scored 3308 runs in 99 T20Is and averages 50.12 at a strike rate of 37.66.

However, Virat Kohli’s stats in T20Is this year has become a serious cause of concern. He averages 20.25 in four matches at a strike rate of 128.57. The 33-year-old was rested by the Indian selectors for the limited overs tour to West Indies. He will also miss the upcoming ODI series against Zimbabwe.

With not many runs under his belt, Virat Kohli will be desperate to do well in the Asia Cup for Team India. His place in the T20I squad might come under threat if he fails to make an impact in the tournament.