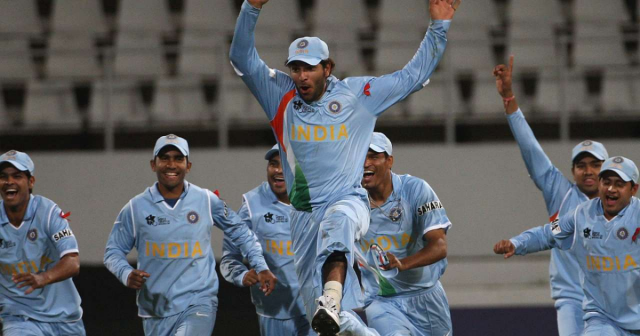 Team India has a 64.06 winning % in the tournament, which is second-best among teams with more than 30 games played. Going into the world cup, India is certainly one of the favourites to lift the trophy

So, in this article, we take a look at 4 memorable matches of the Indian team in the past editions of the T20 World Cup:

Australia got off to a flying start in the virtual quarter-final, with openers Usman Khawaja and Aaron Finch scoring 54 runs in just 4.1 overs. The Aussies set a target of 161 for India on a pitch that was offering some turn and a somewhat inconsistent bounce. Ashish Nehra bowled an economical spell as he gave just 20 runs in his quota of 4 overs.

Then in the run-chase, Virat Kohli produced maybe his best T20I innings, scoring 82 not out off 51 deliveries. One of the most remarkable aspects of his innings was the seven 2s which he completed during that knock, in the scorching heat of Mohali.

India set a target of 142 runs in 20 overs, thanks to a fifty from Robin Uthappa. It wasn’t a big total but tight bowling from Irfan Pathan and RP Singh ensured that India was in the game. At one stage, Pakistan were in trouble at 47/4, but Misbah Ul Haq’s brilliance saw them tie the game in the final over. The match went to a “Bowl-out”.

#OnThisDay in 2007, India v Pakistan at #WT20 ended with scores level, and India won a bowl-out 3-0 in a thrilling tie in Durban! pic.twitter.com/dXf27ruAm8

The bowl-out, similar to a penalty shootout in football, saw both teams attempt to strike the stumps with no batsman in front of them. For India, Virender Sehwag, Harbhajan Singh, and Robin Uthappa all hit the target while for Pakistan, Yasir Arafat, Umar Gul, and Shahid Afridi, all failed to hit the timber. India won 3-0.

India was on the verge of being knocked out in the first T20 World Cup on their home soil after they gave Bangladesh a total of 147 to chase. Singles were all Mushfiqur Rahim and Mahmudullah needed, to give Bangladesh a historic victory. Instead, they both tried for the glory shots and lost their wickets, leaving Shuvagata Hom to score two on the final ball.

Hardik Pandya pitched it short outside off, Hom missed, and a calm-as ever MS Dhoni raced to the wickets to complete the run-out as the batters attempted to sneak a bye. It was a night worth remembering for every Indian cricket fan.

The arch-rivals met again in the final after their group-stage encounter finished with a bowl-out. In the first innings, Gautam Gambhir scored 75, and Rohit Sharma struck a 16-ball 30 to help India reach a total of 157. Imran Nazir responded with a stunning 33 off 14 balls before a Robin Uthappa throw dismissed him.

The @msdhoni-led #TeamIndia created history as they lifted the ICC World T20 Trophy. 🏆 👏

Although Indian pace bowlers regularly grabbed wickets, Misbah-ul-Haq kept Pakistan in the game. With one wicket in hand, a six off the second delivery of Joginder Sharma’s last over reduced the equation to six required from four balls. With the way Misbah was hitting the ball, it looked like the match had turned in Pakistan’s favour. But there was a twist left in the match as Misbah tried to scoop the third ball down to the fine leg. Joginder’s delivery didn’t have much pace and the ball directly landed in Sreesanth’s hands. Ravi Shastri screamed “In the airrrrr, Sreesanth takes it. India win” from the commentary box.