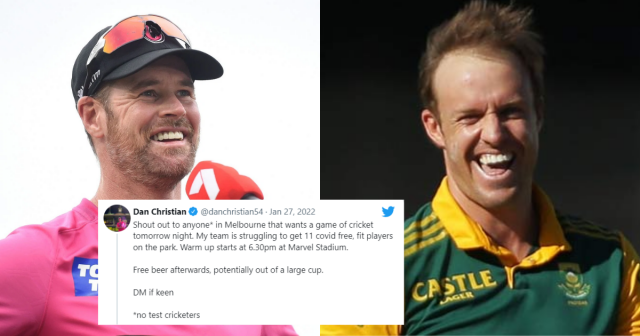 The Sydney Sixers have advanced to yet another BBL final, and are one win away from winning their third title in a row. The Sixers are the most successful BBL team, having won the trophy four times. However, the team is currently having a difficult time off the field, and assembling 11 players for the final would be a challenging task for them.

Moises Henriques, Daniel Hughes, Steve O’Keefe, Jordan Silk, all have injury concerns and Josh Philippe is also ruled out of the match due to COVID-19.

On Thursday, All-rounder Dan Christian posted a hilarious tweet and asked for some players who can join the Sixers team for the final. “Shout out to anyone* in Melbourne that wants a game of cricket tomorrow night. My team is struggling to get 11 covid free, fit players on the park”, he wrote.

Shout out to anyone* in Melbourne that wants a game of cricket tomorrow night. My team is struggling to get 11 covid free, fit players on the park. Warm up starts at 6.30pm at Marvel Stadium.

Free beer afterwards, potentially out of a large cup.

This remark about “no Test cricketers” could be a jab at Cricket Australia (CA) for refusing to allow Steve Smith to join the team. Following the postponement of Australia’s series versus New Zealand, Steve Smith had expressed interest in playing the BBL, but his request was declined by the cricket board.

Meanwhile, South African legend AB de Villiers came up with a funny response to Christian’s tweet and said that he’s ready to join the Sixers’ Playing XI, but only if he is given a chance to bowl 4 overs in the game. “I’m keen if u can guarantee me my 4 overs?”, de Villiers wrote.

I’m keen if u can guarantee me my 4 overs?

Sydney Sixers advanced to the final after a thrilling final-ball victory against the Adelaide Strikers. Due to the absence of players because of COVID-19, Sydney Sixers assistant coach Jay Lenton had to be included in the Playing XI for the semi-final clash.