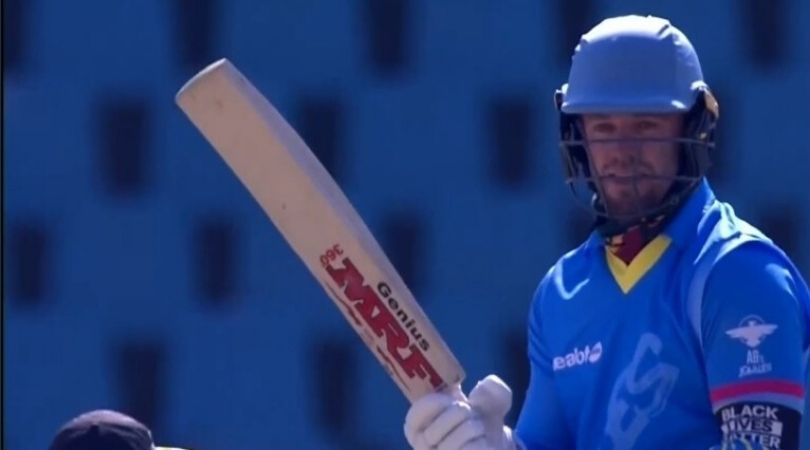 Cricket in South Africa made its return today as several top players of the country played in the Solidarity Cup. The tournament was an experiment and one of a kind as three teams featured in the same match. The great AB de Villiers stole the show as he blazed away a 21-ball half-century.

De Villiers retired from international cricket in 2018 which came as a surprise to everyone.
However, since the last few months, the former skipper of South Africa has hinted that he may return to international cricket. The Director of Cricket Graeme Smith who was working as a commentator would have a kept a close eye on the champion player.

Popularly known as Mr.360, de Villiers was at his vintage best as he dominated from the get-go. His trademark shots were all on display during his innings which helped his side Eagles post a total of 160 in mere 12 overs. De Villiers ended his innings at 61 which he scored off just 24 deliveries.

The Solidarity Cup had 24 top crickets of South Africa feature in the tournament playing for three teams Eagles, Kingfisher and The Kites. Teams played in two halves of a single match with every team consisted of 8 players each.

The rules of the Solidarity Cup were such that three teams played the match. 36 overs in 2 halves of 18 overs with a half time break. One innings of 12 overs each per team. Bat and bowl against one opponent in each half for 6 overs. Team with most runs Gold, the second silver and third bronze, AB de Villiers side Eagles defeated the two teams and won gold in the 3T Cricket.

Meanwhile, AB de Villiers has proved that there is no rustiness in his batting and can make a comeback later this year. A lot of speculations are going around about his return to international cricket. However, with ICC set to postpone the T20 World Cup; his comeback looks unlikely.