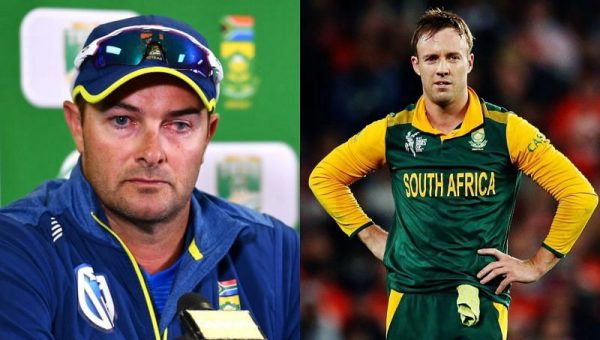 The mystery surrounding AB de Villiers’ return to international cricket continues to get intense as the ICC T20 World Cup 2021 approaches closer. With another six months to go for the mega event scheduled to take place in India, South Africa head coach Mark Boucher has revealed that the discussion to bring back AB de Villiers into international cricket is not completely over.

Meanwhile, for some months in the build-up to the ICC T20 World Cup 2020, there were talks that the former South African cricketer will come out of retirement and will feature for his national team once again. However, the tournament was postponed and the talks went away with time. Incidentally, AB de Villiers called time on his international in May 2018 shocking the entire cricketing fraternity.

But ever since South Africa crashed out of the 2019 World Cup, there have been talks to bring AB de Villiers back in the scheme of things. To strengthen the claims, Mark Boucher has now revealed that he had a talk with AB de Villiers before he left for the Indian Premier League. The right-handed batter is currently playing for the Royal Challengers Bangalore in IPL 2021.

“I did chat to him before he went to the IPL. The conversation is still very much open. AB, being the person he is, wants to perform very well at the IPL to prove to himself and everyone else that he is still a very key figure in world cricket and could dominate at that level,” said Boucher as quoted by iol.ca.za.

Mark Boucher also added that AB de Villiers is very keen to prove himself in the IPL and has made a good start to the campaign with a match-winning knock. The former Proteas cricketer turned coach also added that he said to De Villiers that he will have a talk with him towards the back end of the IPL.

“I said to him: ‘Go do your thing, and I’ll give you a shout towards the back-end of the IPL.’ So that is where we are with him,” added Boucher.