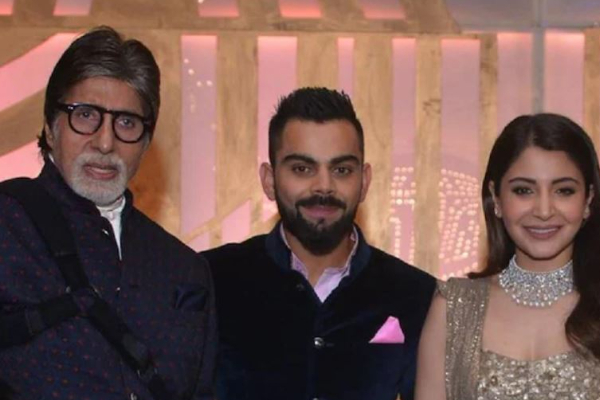 Veteran Bollywood actor Amitabh Bachchan recently posted an Instagram post that involved a direct reference to Anushka Sharma and Virat Kohli’s apartment in Mumbai. The Cricket – Bollywood couple is one of the most famous couples going around in the nation, recently the duo was also blessed with a baby girl Vamika during the month of January.

Virat Kohli will be leading Royal Challengers Bangalore for the 11th time in this IPL which will hold key importance for the Indian skipper given that he has never won the IPL in the history of the game. There will be plenty of challenges and additional pressure going into this league for the Play Bold franchise skipper given that Virat Kohli‘s captaincy has not yielded the required returns.

Amitabh Bachchan who has starred in over 500 Bollywood films recently posted a post on his Instagram profile that had a direct reference to Anushka Sharma and Virat Kohli‘s house in Mumbai.

“Rang abhi tak utara nahin : Aur tyohar ke chutkule band nahi hue (The colours of Holi have not been washed out yet and I have not run out of festive jokes either). With due respect to Anushka and Virat ..ENGLISH. : Anushka has a huge apartment! HINDI: Anushka ke paas Virat Kholi hai Courtesy my Ef from my Blog .. AM,” Amitabh wrote in the caption.

Amitabh Bachchan‘s post was related to Holi in which he said that the colours of Holi haven’t faded away while at the same time the essence of the festival still hasn’t turned down. The veteran actor further wrote with due respects to Anushka Sharma and Virat Kohli that Anushka Sharma has a huge apartment in Mumbai further translating it to Hindi which said ‘अनुष्का के पास विराट खोली है।, where Virat meant Huge and Kohli meaning house.