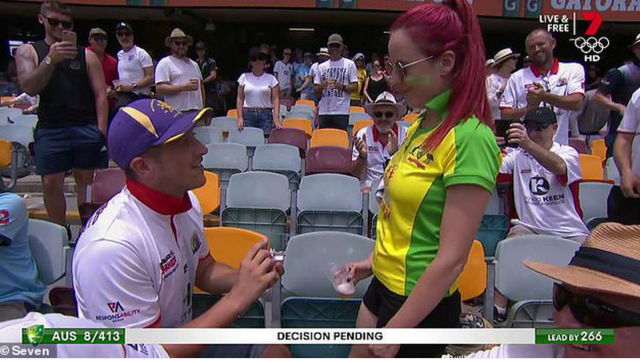 An England cricket fan named Rob Hale got engaged to his Australian girlfriend Natalie after proposing during the first Ashes Test at the Gabba. While there was some tough cricket being played on the pitch there was love in the air for Rob and his girlfriend Natalie.

The cameras caught the moment of Rob proposing to his girlfriend and she said yes in return to make this an unforgettable moment. This is one among the many moments when either the boyfriend or the girlfriend has expressed their love for each other in an Ashes Test.

Rob who met Natalie in the Ashes series of 2017, went down on his knees to propose to his girlfriend. There was a massive cheer when the girl said yes as it was broadcast live on Channel 7.

“How good is that. They met the last time England were out. Rob’s in the Barmy Army, Nat’s of course an Aussie. That is brilliant” said the TV commentator.

The Barmy Army tweeted the video of his proposal as a token of appreciation for Rob. “Massive shoutout to Rob Hale, he met Natalie back in 2017 during the last #Ashes with the Barmy Army! Congrats guys” said the caption.

It Was Love In The Air At The Gabba

Massive shoutout to Rob Hale, he met Natalie back in 2017 during the last #Ashes with the Barmy Army!

Meanwhile, Australia scored 425 in their first innings in reply to England’s 147. Travis Head scored 152 off 148 balls and along with David Warner’s 94, Australia finished pretty strong. “It’s still a pinch-myself sort of thing, still can’t quite work out what transpired over the last couple of hours. It’s an amazing feeling to get a Test hundred. Think I said to Starcy [Mitchell Starc] as it happened, I couldn’t believe what was going on. I rode my luck in parts but was able to put Australia in a great position and very privileged to be able to do that” Head said.

England in reply in their second innings are fighting hard and are trailing Australia’s score by 90-odd runs still.