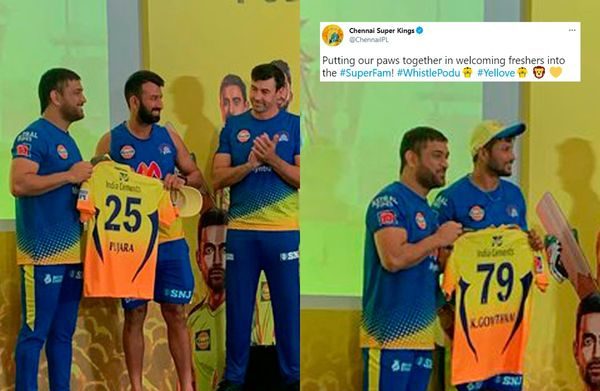 Chennai Super Kings gave a warm welcome to their new recruits ahead of the brand new season of the Indian Premier League (IPL). The MS Dhoni-led side will begin their IPL 2021 campaign against Rishabh Pant-led Delhi Capitals on April 10 (Saturday) at the Wankhede Stadium in Mumbai.

The Super Kings have added a couple of cricketers – Cheteshwar Pujara, Moeen Ali, Krishnappa Gowtham, and Harisankar Reddy to their ranks to bolster their squad. Chennai signed spinner Gowtham for a whopping price of INR 9.25 crore while England all-rounder Moeen Ali was roped in for a staggering INR 7 crore at the IPL 2021 auction. Chennai Super Kings, who finished seventh in IPL 2020 in the UAE failing to qualify for the playoff for the first time, will look to add their tally of three titles when they begin their campaign.

Chennai Super Kings welcome their new recruits ahead of IPL 2021

“Putting our paws together in welcoming freshers into the #SuperFam! #WhistlePodu #Yellove,” CSK captioned the post on Twitter.

Meanwhile, Cheteshwar Pujara, who is set to make his comeback in domestic cricket’s biggest extravaganza with CSK said that he was honoured to receive the team jersey from skipper MS Dhoni. Taking to Twitter, Pujara expressed gratitude to the Chennai Super Kings franchise and said that he is looking forward to a great season with the Yellow Brigade.

Regarded as one of the finest batsmen in the longest format, Cheteshwar Pujara was picked by Dhoni’s CSK at the IPL 2021 auction. Pujara received a round of applause at the IPL auction 2021 when the veteran batsman was signed by the Chennai-based franchise.

“Excited and honoured to receive the official kit from @msdhoni bhai and the @ChennaiIPL family! Looking forward to a great season ahead #famlove #fresher #whistlepodu,” Pujara tweeted.

Excited and honoured to receive the official kit from @msdhoni bhai and the @ChennaiIPL family! Looking forward to a great season ahead 👍🏼#famlove #fresher #whistlepodu pic.twitter.com/XfIkzgye54