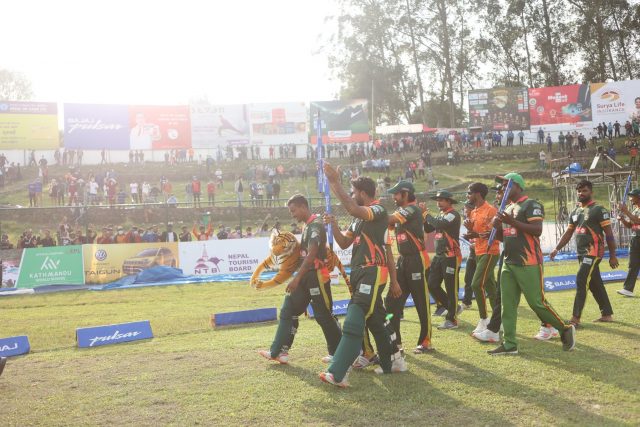 Chitwan Tigers are crowned as the champions of the 4th edition of the Bajaj Pulsar Everest Premier League (EPL). They registered a cakewalk win of 4 wickets against Pokhara Rhinos in the final held on 9th October at TU International Cricket Ground.

Chitwan Tigers, after winning the toss asked Pokhara Rhinos to bat first. Unlike in their previous matches, young Bipin Rawal walked to open the innings for the Rhinos along with South African, Richard Levi. Their new ploy seemed to be working when the opening duo get them off to a flying start, adding 33 runs from just 3 overs.

Karim Janat, Chitwan’s foreign pacer from Afghanistan gets rid of Richard Levi to provide the first breakthrough for his side. After the wicket of Levi, Pokhara completely lost the plot. Rit Gautam, who was struggling throughout the tournament was yet again dismissed cheaply by Kamal Singh Airee in the following over.

#KamalSinghAiree is the man of the match in the final, who receives his medal from Mr. Bedi Singh, CEO- Dabur Nepal for his exceptional bowling.#eplt20#DareToDream #EPLFinals pic.twitter.com/ullaJuc8Vh

Sahan Arachchige was also sent back swiftly by Sompal Kami as the Pokhara suffered an embarrassing batting collapse from 37/1 to 43/3. Pokhara never got back in the match after this. Opener Bipin Rawal was holding the one end for the Rhinos until the tournament leading wicket-taker, Sagar Dhakal dismissed him for 17.

Veteran Srilankan batsman Asela Gunaratne and their skipper Binod Bhandari tried to rebuild their innings. The duo added 35 runs for the 4th wicket to embolden their innings. Sekkuge Prasanna broke the partnership by dismissing Gunaratne for 34.

Pokhara found themselves in big trouble when Kamal sent back Bibek Yadav and Lokesh Bam in the 15th over. Prasanna also bagged his second wicket following that over. Bhandari kept on fighting from one end but he didn’t get the company from the other. He was also dismissed by Kamal as their last wicket and Pokhara were bundled out for paltry 111 runs.

Kamal Singh Airee picked up 4 wickets for the Tigers. Prasanna, Janat bagged 2 wickets each whereas Dhakal and Kami also pocketed a wicket each.

Chasing a mere target of 112 runs, Chitwan didn’t get the start they wanted. Nandan Yadav dismissed Hasim Ansari for the first ball duck in the very first over. Karim Janat too departed without troubling the scoreboard. Mohammad Shahzad also failed to deliver this time as Kishore Mahato dismissed him to grab his second wicket of the match.

Chitwan were staring down the barrel when they lost 3 important wickets for just 20 runs. Then, it was Bhim Sharki and Dilip Nath who kept the scoreboard ticking. Both of the batters batted sincerely to rebuild Chitwan’s innings. The duo firmed a 54 runs stand for the 4th wicket. Mahato sent back Nath in his second spell.

Sharki kept on fighting from one end and gets his well-deserved half-century in the 12th over. He was dismissed for 63 by Mahato when Chitwan were just 2 runs away from the victory. Their skipper, Sompal Kami smashed a boundary to seal the deal for his side in the 16th over.