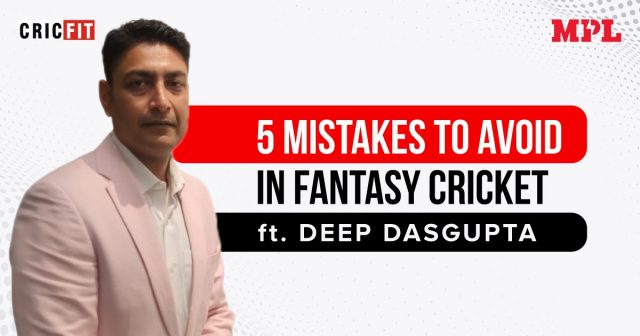 Former India cricketer Deep Dasgupta has joined hands with the Mobile Premier League (MPL) as a fantasy expert for the second phase of the Indian T20 League 2021, scheduled to commence on September 19 in the UAE. Defending champions Mumbai will lock horns with three-time champions Chennai in the opening encounter at the Dubai International Cricket Stadium.

What is Fantasy Cricket?

Fantasy cricket, as the name suggests, is an online fantasy game where you can create a virtual cricket team of 11 players from an upcoming real-life match. The process of playing a fantasy cricket match is quite simple. Your main objective is to score as many points as possible and achieve a position on the leadership board by beating your opponents.

5 mistakes to avoid in Fantasy Cricket according to Deep Dasgupta:

#1. Making only one Fantasy Team

The main mistake a rookie makes is making only one team. With only one team it becomes essential to have all 11 players perform in a match. The one-team theory can work in small leagues but in big leagues, it is important to have multiple teams with different players, feels fantasy expert Deep Dasgupta.

Also, it is important to have teams spread in small and big leagues together to be successful in Fantasy Cricket.

Most often, the fantasy players get emotionally attached to the teams and pick big names, thinking that it is imperative to have them in the fantasy team. This tendency becomes a problem at times as star players cannot be expected to perform in all the games.

A fantasy player needs to have differential cricketers in their side, who might not be a big name but is in superlative form or the condition might suit him. It is crucial to do homework and analyse the players before picking them in the fantasy XI.

A fantasy player often thinks about making as much money as possible, considering that they have invested an amount. Deep Dasgupta feels if a player goes in with the intention of making money, a fear of failure crops in eventually.

It is crucial to be selective with the matches you play. Even if you are playing every single match of all the leagues, it is essential to study and analyse the players, conditions, and the league before making a fantasy XI team.

It’s better to avoid playing all the games and concentrate on matches and players, a user is aware of.

#5. Not choosing teams and combinations based on toss and pitch

It is very important to set the team combinations after the toss takes place, believes Deep Dasgupta. In T20 cricket, teams mostly prefer to chase so it is better to choose the combinations accordingly and analyse well before picking extra batter and bowlers.

It is also important to learn about the wicket’s behaviour before the toss from the experts and pick players as per the condition.

These are the 5 points, a fantasy user needs to keep in mind before making a fantasy XI team.