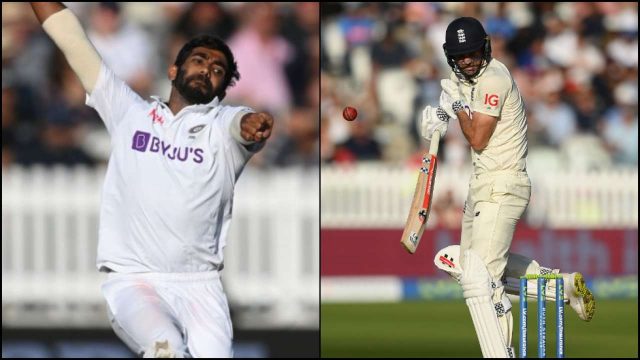 England fast bowler James Anderson has opened up on the barrage of bouncers from Jasprit Bumrah he faced in the first innings of the Lord’s Test. It led to a fierce battle from players of both camps which ultimately benefitted India as they secured an emphatic victory by 151 runs at the Home of Cricket.

Incidentally, Bumrah went after England’s No.11 batsman Anderson on day 3 of the second Test. Speaking on the same, James Anderson said it was probably the first time in his career that he felt a bowler was not trying to get him out.

James Anderson wasn’t happy at all with Jasprit Bumrah bowling with speed to him 👀#India #England #ENGvIND pic.twitter.com/71kwM05bjI

Speaking to the Tailenders podcast, Anderson said that he received wrong information about the wicket from his fellow teammates. He said:

“I got caught off guard a little bit because all the batters coming in were saying how slow the pitch was,” said Anderson. “Banged in short; it was really slow. When I came out to bat, Joe said Bumrah was not bowling as quick as he normally does. And then, the first ball was 90 miles an hour and on the money, wasn’t it? And it felt like, I haven’t felt like this ever in my career. I felt he wasn’t trying to get me out.”

Adding further, James Anderson stated that Jasprit Bumrah was not trying to get him out and instead attacked his body.

“I felt he wasn’t trying to get me out. He bowled an over, maybe 10, 11, 12 balls. He was bowling no-ball after no-ball, bowling short. I think he bowled two on the stumps which I managed to dig out. So for me, it was just about trying to survive that and get Joe back on strike,” James Anderson added.

Emotions didn’t get the better of England cricketers: James Anderson

England’s tactics on day 5 against Indian tailenders received widespread criticisms from all quarters. However, James Anderson insisted that emotions didn’t get better of them.

“Potentially the emotion can get the better of you at times. But, I thought the way we bowled in the second innings was pretty much the opposite. We took the emotion out of it. We just focused on the process of bowling them out, keeping the runs down,” he concluded.

The third Test of the series will start on August 25 at Headingley in Leeds.