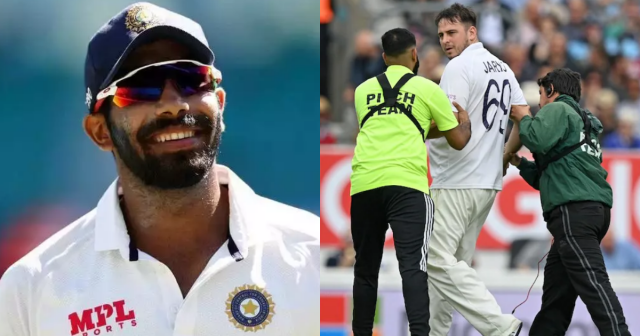 Despite the fact that pitch invader Jarvo has been in the spotlight for all the wrong reasons recently, a social media post apparently from his account following India’s win at the Oval has gone viral. Jarvo made another appearance to the ground at The Oval on Day 2 of the fourth Test.

When Umesh Yadav was about to bowl, Jarvo came in as a bowler. He collided with Jonny Bairstow, who was on the non-end striker’s of the pitch.The security guards then took him off the field.

After India’s first win at the Oval in 50 years, a Facebook user named Jarvo 69 hailed India’s pace spearhead Bumrah. He complimented him for dismissing Jonny Bairstow. Bairstow was late to the ball and appeared to be beaten by the sheer speed which Bumrah generates.Jarvo expressed his delight at Bairstow getting out for a duck, noting that Bairstow had scolded him the day before,when he clashed with the batsman. 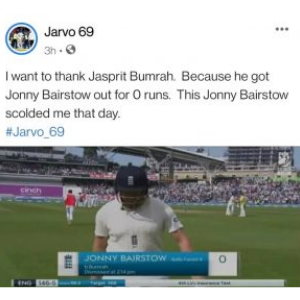 Bumrah’s Spell Changed The Game On Its Head: Joe Root

Meanwhile, on Day 5, Bumrah employed reverse swing and yorkers to his advantage, allowing India to take six wickets in the second session. Bumrah was India’s primary weapon, and his spell transformed the game’s course. Virat Kohli, India’s captain, praised the pacer’s performance after the game.

“As soon as the ball started reversing, Bumrah said give me the ball. He bowled that spell and swung the game in our favour with those two huge wickets”,said Kohli.

Later, England captain Joe Root also stated that Bumrah’s spell, in which he took the wickets of Ollie Pope and Jonny Bairstow, snatched the game away from them totally.

“Bumrah is a world-class bowler and outstanding spell by him after the lunch. I think that spell changed the game on its head.” said the England captain in the post-match presentation.

💬We've got to be a little bit more ruthless.💬