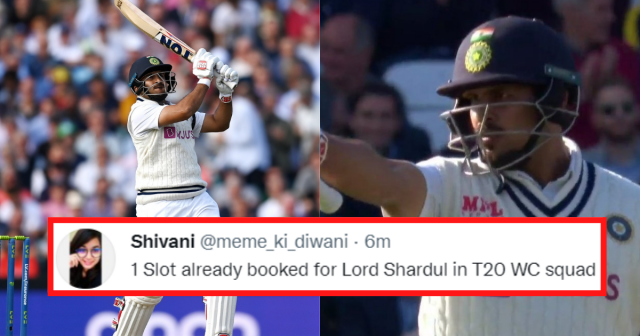 Shardul Thakur scored his second Test fifty to take India closer to 200 before they were eventually bowled out for 191 on day 1 of the fourth Test at The Oval. In the process, he added a 63-run stand for the eighth wicket with Umesh Yadav (10 off 20). Thakur and Yadav launched a counter attack which forced England skipper Joe Root to think hard after the hosts had India almost on the mat at 127/7 after the wicket of Rishabh Pant.

Shardul Thakur hit seven fours and three sixes in his 36 ball-57 to keep India in the game. Shardul ended up being the highest scorer for India in this innings. Earlier, in the innings,  Virat Kohli scored exactly 50 before falling to Ollie Robinson.

It was a combined performance from the England bowlers to keep India under 200. Robinson took three, while Chris Woakes took four on his return getting the ball to seam and swing. Craig Overton and James Anderson bowling with a bleeding knee took one each.

Fastest Test fifty in England. Ever. Ever. #Lord #Shardul #EngvInd

Third umpire choked down with tears while telling the on-field umpire Lord Shardul is out. These are the moments we live for. 🙏

India never lost a test match when Shardul Thakur was part of XI..

So India stretched the score to 191 thanks to Thakur’s bravado and chutzpah. But what does it speak of a batting side which so frequently fails to last 60-65 overs? Some serious plain talking by team management needed in dressing room

Meanwhile, the exclusion of Ravichandran Ashwin was another highlight of the day’s play. He has been benched for the fourth Test match straight now with the Indian management under the scanner. He was expected to play at The Oval given that it has help for the spinners but that it was not to be.

“For us, it’s about partnerships, we can’t focus too much on individuals. The opening partnerships have been good, it’s about getting more partnerships. We got a few days left on this tour, the series is poised nicely and there is going to be no shortage of effort from our side” said Kohli at the toss when asked about Ashwin’s exclusion at The Oval.