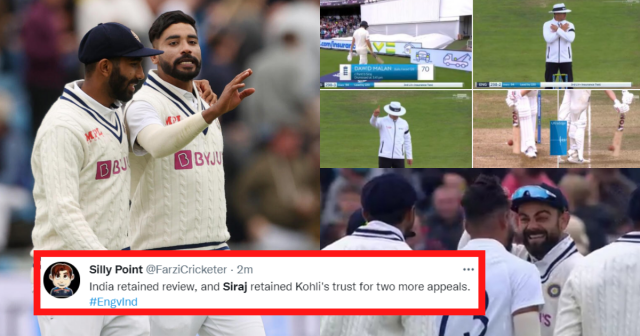 Team India rode a bit of luck heading into tea as Mohammed Siraj dismissed a well-set Dawid Malan with the faintest of edgest down the leg side. The umpire called not out initially but Virat Kohli took the DRS call on instinct and the decision was overturned by the third umpire. The wicket of Malan ended a 129-run stand between him and Root as India got a luck break heading into tea.

Siraj who had bowled had a wicketless spell till then bowled a ball outside the leg stump. Dawid Malan very languidly tried to flick the ball but ended up knicking it as Rishabh Pant took an easy catch. Interestingly, Pant did have no clue if the ball had taken the edge of Malan’s bat. Mohammed Siraj insisted Kohli to go for the review who took ample time to discuss before he eventually opted for the review.

The replays showed that Malan had knick the ball and finally the decision was overturned as he walked back after a well-played knock. Root, on the other end, was surprised to see everything unfold.

Meanwhile, Twitter hailed Virat Kohli’s luck with the DRS call and also insisted that Siraj has perhaps retained the faith of his skipper on DRS calls.

Siraj gives the breakthrough for India, breaks 139 runs stand between Malan and Root as he gets Malan for 70 and England lead by 220 runs in the first innings.

Fans after Virat Kohli won the toss AND took a good review in the same match pic.twitter.com/v5mj5ZFRge

Malan (70) falls on the stroke of tea, tickling Siraj down the leg-side. Great review by the seamer! 👍

Right on tea Siraj dismisses Malan! The partnership of Malan and Root is broken. #ENGvIND

Virat Kohli did not have a good series so far on DRS calls until this point. He was criticised for being casual with his calls especially in the second Test at Lord’s. Meanwhile, one entire session of the day’s play is still left with England skipper Joe Root inching closer to his third hundred of the series.

Root went past 400 runs during the course of his innings. He has already scored about 1200 runs in this calendar year in this format. England meanwhile have gathered a good lead of over 200 runs and looks to stretch it to 300 by the end of the day’s play.