After the dramatic first Test between England and West Indies where West Indies defeated England comprehensively on Day 5. England will be looking to bounce back in the second test after suffering a defeat early on in the series. The 2nd test will be played at Old Trafford, Manchester.

England captain Joe Root will return to the side after returning from paternity leave. It is expected that he will slot himself at 4. As Joe Denly who averages just 29.53 is most likely to be dropped from the side after scoring just 18 and 29 in the first test at Southampton. England have announced 3 changes to their previous 13 man squad. Denly, Wood and Anderson make way for Root, Woakes and Broad.

The pitch has been undercover as it has been raining in Manchester since last few days. We may expect little rain during the match but the forecast says it most likely to be a bright sunny day. The Old Trafford pitch is more likely to offer more assistance to the seamers than in Southampton.

Due to which we may see the return of Stuart Broad in England playing Xi. As he’s more experienced than Wood and Archer in bowling in such conditions. The extra bit of lateral seam movement may just push England in bringing in Broad for the 2nd test.

On the other hand, West Indies are more likely to play an unchanged playing XI unless there’s any injury to any player in the squad. Rahkeem Cornwall might be included in the playing XI due to his skiddy deliveries.

As of today, there is no such injury update from both sides. James Anderson and Mark Wood have apparently been rested. Other than this all players from the England & West Indies squad look fit to play. Joe Root, who missed the first Test will return to the squad and take the reins from Ben Stokes.

Joe Root is returning to the squad as captain of the side. He will be under pressure to win the test and keep the series alive. Root’s batting record at Old Trafford is phenomenal as he averages 85 with 4 fifties and 1 century.

Zack Crawley scored a gritty 76 off 120 balls in the 2nd innings of the first test will be shifted up the order at 3 as Root will be batting at 4. If things look good he’ll be England’s long term Number 3 based on his recent performances.

Stuart Broad will mark his return to the side in place of Wood. The right arm veteran seamer will have a point to prove after being dropped in the first test at Southampton.

Jason Holder, the number one all-rounder in Test cricket will be looking to continue his form against England. Having picked up 7 wickets in the first test and on top, the pitch is likely to offer more to the seamers. So we may see Holder pick more wickets than he did in the first test.

Jermaine Blackwood who scored a match-saving 95 in the first test will be aiming for a century this time at Old Trafford. After getting out to a disastrous shot in the first innings, he came back strong and proved his selection to the management.

Shane Dowrich looked calm and composed with the bat in the first innings having scored 61 batting at 7 for West Indies. He tackled Jofra Archer‘s bouncers with ease and didn’t look like he was batting under any pressure. If his form continues we’re up for another high score from the little man.

The visitors stunned the host in the first Test. However, they look in line to bounce and square off things in the second encounter in Southampton. 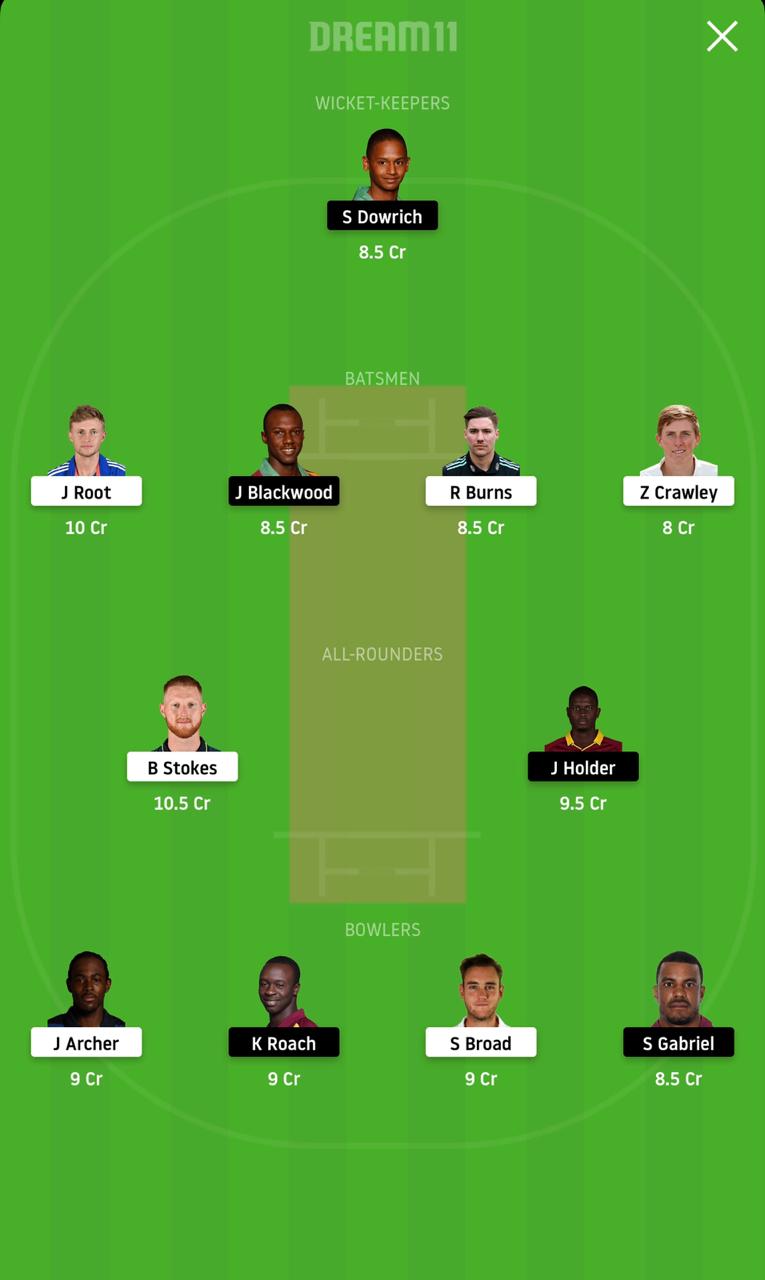