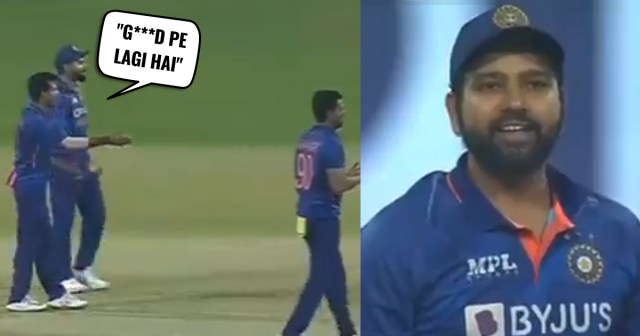 Some team India players, including captain Rohit Sharma, Virat Kohli, and leg-spinner Yuzvendra Chahal, were involved in a DRS call during the first T20I of the ongoing series against West Indies. It happened in the 9th over of West Indian innings. On the 4th ball, Roston Chase was on-strike and the bowler was Yuzvendra Chahal.

Chahal bowled a flighted delivery, and Chase attempted a paddle sweep but failed, and the ball struck his pad. The Indian fielders next launched a big LBW appeal, but the on-field umpire was unconvinced.

Chahal wanted skipper Rohit Sharma to opt for DRS even though the point of impact seemed to be outside off stump. Former India skipper Virat Kohli also provided his opinion. Since there was no noise in the stadium, players’ voice was clearly heard through the stump mic.

Rohit Sharma eventually took the DRS. However, TV replays indicated that the impact was indeed outside off-stump, and India lost the review.

Ravi Bishnoi was named Player of the Match for his impressive performance on debut. India will be concerned about Deepak Chahar’s injury, as the bowling all-rounder appeared to be in severe discomfort after attempting to stop a Kieron Pollard shot on Bhuvneshwar Kumar’s bowling.

.@surya_14kumar and Venkatesh Iyer take #TeamIndia home with a 6-wicket win in the 1st T20I.