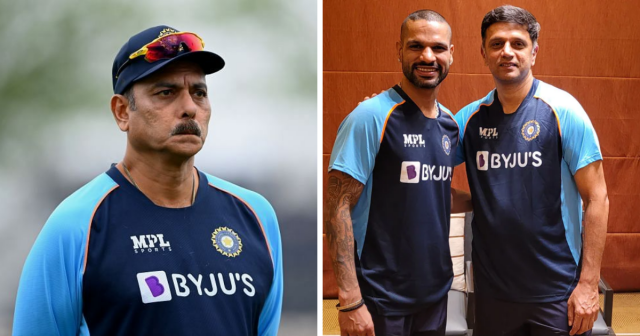 Ever since Rahul Dravid was appointed as the head coach for the Sri Lanka series, speculations claimed that he might replace incumbent Ravi Shastri after his contract ends after the ICC T20 World Cup 2021. However, former cricketer Aakash Chopra feels Dravid is unlikely to put his hat in the ring for the head coach’s role.

Incidentally, Shastri got a contract extension after India was knocked out in the semifinal of the ICC 2019 World Cup against New Zealand. However, the post will be vacant after Ravi Shastri’s current contract comes to an end of the ICC T20 World Cup 2021.

While Rahul Dravid has emerged as a strong contender, Aakash Chopra pointed out that Dravid is unlikely to be in the race.

“I don’t think Rahul Dravid is going to put his name on the list. There can be just one competition if Rahul says he wants to be India’s coach. If he wants, then it will be a strong fight,” Aakash Chopra said on his YouTube channel.

The former India all-rounder has done a decent job in his tenure as the head coach. Although the Men in Blue have not won an ICC event, but the Virat Kohli-led side has earned landslide victories in Australia in 2018-19 and 2020-21. They

Aakash Chopra added if Rahul Dravid doesn’t apply for the head coach, Ravi Shastri will continue as the head coach of Team India. The cricketer-turned-commentator said:

“But if Dravid doesn’t put his name, whoever puts his name on that list, he will not be able to stand in front of Ravi Shastri, that is what I believe but then we shall find out.”

Currently, Rahul Dravid is the director of cricket at the National Cricket Academy in Bengaluru. Ever since he has took up the role, India’s bench strength has become stronger than ever.