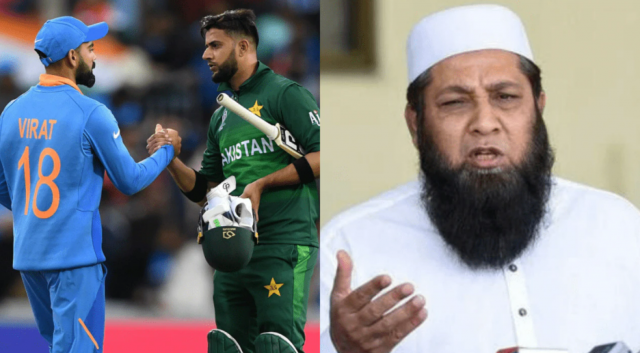 Former Pakistan skipper Inzamam-Ul-Haq has said that the India-Pakistan clash on October 24 is very much like the “final before the final”. The Super 12 stage kicks off on October 23 with the two teams playing the game on October 24. India have beaten the Men in Green five times before in T20 World Cups. Pakistan, meanwhile, is eyeing to get the record straight.

Former Pakistan skipper Inzamam-ul-Haq has stated that in any multi-nation tournament it cannot be said with certainty that a particular side will win the tournament. Inzamam has backed India to win the tournament hailing the senior players in the side.

“In any tournament, it cannot be said for certain that a particular team will win. It’s all about how much chance do they have of winning it. In my opinion, India has a greater chance than any other team of winning this tournament, especially in conditions like these. They have experienced T20 players as well,” said Inzamam-ul-Haq while speaking on his YouTube channel.

Inzamam-ul-Haq also added that the clash between India and Pakistan is like the final before the final, and no match will be hyped as much as that one in the tournament.

“The match between India and Pakistan in the Super 12s is the final before the final. No match will be hyped as much as this one. Even in the 2017 Champions Trophy, India and Pakistan started and finished the tournament by facing each other, and both the matches felt like finals. The team winning that match will have their morale boosted and will also have 50 percent of pressure released from them,” concluded Inzamam-ul-Haq.

In his professional career, the former Pakistan skipper played 120 Tests and 378 ODI matches for Pakistan. While the right-hander scored 8830 runs in the whites, Inzamam plundered 11739 runs in the ODI format of the game. He still is Pakistan’s highest run-getter in both formats of the game.