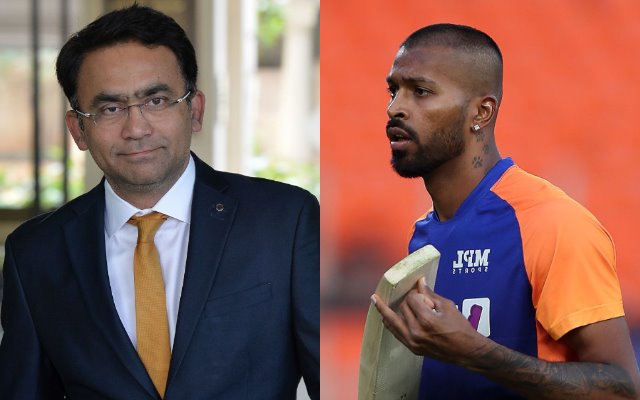 All-rounder Hardik Pandya has been selected in the Indian T20 World Cup squad to be played in the UAE later this month. He has not bowled yet in the second leg of the IPL2021 with Mumbai Indians coach Mahela Jayawardene saying that he is close to bowling soon. Meanwhile, former Indian wicketkeeper-batsman Saba Karim has expressed his concern over Pandya’s selection if he is unfit to bowl in the mega event.

Hardik Pandya did not play the first two games of the UAE leg and has not been bowling in the matches that he played so far. With the bat, he helped his side beat Punjab Kings in one of the matches since the restart of the season.

“Hardik Pandya has been selected in the T20 WC squad to perform the role of a sixth bowler. Hardik not bowling will create an imbalance in the Indian team just as it has created issues for the Mumbai Indians. If he bowls even 2-3 overs in the remaining couple of matches then it will augur well for Team India,” said Saba Karim.

Hardik Pandya Yet To Bowl Since International Comeback

If Hardik Pandya is not bowling then why the hell he is included in ICC T20 World Cup squad ??
If he will not bowl then bring Shardul Thakur in place of him. pic.twitter.com/D92J2fcEDF

Apart from Hardik Pandya, the likes of Ishan Kishan and Suryakumar Yadav who have been selected in the Indian squad have not been in the best of form in the IPL. Saba Karim has also raised concerns over their form.

“I was hoping that MI players who have been selected in the Indian team will perform and carry their form in the T20 World Cup. Unfortunately they haven’t been able to do that. But they have few matches to get back in touch but at this point in time their form is cause of concern for India,” said Karim.

Hardik Pandya after Mumbai’s last game against Delhi Capitals spoke about his bowling form and how soon will he resume bowling.

While Mumbai Indians struggling to find balance in their playing X1 from the last few matches, Head coach Mahela Jayawardene said, “We’re trying to do what’s best for Hardik, going forward. Whether he can bowl or not in the IPL is something we will have to look at”.