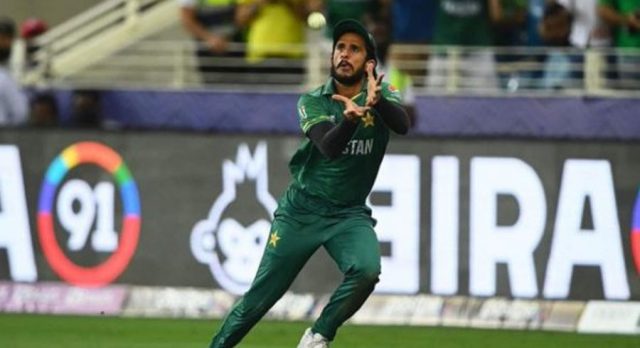 Pakistan’s dream campaign in the ICC T20 World Cup 2021 came to an end on Thursday at the Dubai International Cricket Stadium. They lost to Australia by five wickets in the semi-finals. Pacer Hasan Ali was trolled massively on social media following the loss, as he dropped a catch at a crucial juncture in the match.

With Australia needing 22 runs off the last two overs, Babar Azam brought his best bowler, Shaheen Afridi into the attack. The pacer started off the over brilliantly, conceding only just 2 runs of the first two balls. Australian wicket-keeper batter, Matthew Wade mistimed the next delivery to deep mid-wicket, where Hasan Ali overran and dropped the catch. Matthew Wade capitalized on this opportunity and slammed three consecutive sixes to take Australia over the line.

Earlier, in the match, Australia won the toss and asked Pakistan to bat first. Openers Mohammad Rizwan and Babar Azam added 71 runs for the first wicket before Babar was dismissed. Fakhar Zaman got together with Rizwan to build another partnership. However, after the second wicket, Pakistan lost a bit of momentum but finished it off well, scoring 15 off the last over to reach 176 runs.

In reply, Australia got off to a disastrous start, losing skipper Aaron Finch in the first over. Marsh and Warner stabilized the innings slightly before they were reduced to 5 down for 96. However, Marcus Stoinis’ and Matthew Wade’s emphatic innings, saw Australia through.

As Pakistan’s campaign came to an end, memes started flooding in trolling Hasan Ali, for his dropped catch.

When u know even after 3 sixes, Hassan Ali will be the villain of the match. pic.twitter.com/a0ojl6WzLU

#maukamauka It's neither Wade nor Stoinis. Let's take a moment to appreciate Hasan Ali for carrying the catch dropping tradition successfully. pic.twitter.com/xDpNWLuy5N

Pakistanis are waiting for "Hassan Ali"
at the airport. pic.twitter.com/fBDdZ6xYLT

First a drop catch And after That 3 back to back Sixes by MATHEW WADE and credit goes to Hasan Ali 😂😂 #PAKVSAUS #Australia pic.twitter.com/lKsBecoQqt