Shaheen Shah Afridi was the star performer for Pakistan against India in the ICC T20 World Cup 2021. The Babar Azam-led team dominated the match, defeating India convincingly by 10 wickets.

Pacer Shaheen Afridi set the tone for Pakistan in the match, dismissing India’s opener early in the first innings. The deliveries, to dismiss KL Rahul and Rohit Sharma impressed many fans and former cricketers.

In an interview with Telegraph.co.uk, Shaheen credited KL Rahul’s wicket to Shoaib Malik. Shaheen bowled an inswinging length delivery, which Rahul tried to whip across the line, but missed the ball completely, as it sneaked past his bat to hit the stumps. Shaheen said,

“I asked Shoaib, can I bowl fuller? He said to me ‘Shaheen, don’t bowl fuller, just try to bowl length here, yeah?’ So I said, yeah not too much swing first over, so let me try to bowl the ball. Shoaib is playing for 22 years for Pakistan. He’s played a lot of cricket – he knows everything because of every condition, he played in. And he is playing for Pakistan for so many years. He has the experience and so that’s why I asked him which ball shall I bowl to Rahul.”

“It’s not my wicket, it’s your wicket,” Shaheen recalls saying to Shoaib Malik after the fall of KL Rahul’s wicket.

That opening spell of Shaheen Afridi.first half an hour broke India mentally and later they never recovered from that phase 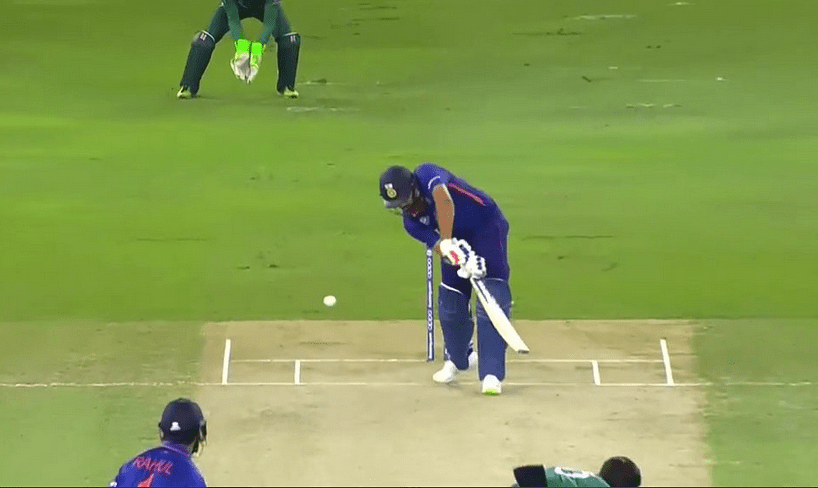 Shaheen Afridi also revealed how he planned to dismiss the other Indian opener, Rohit Sharma. He bowled inswinging yorker on the middle-stump, which struck Rohit on his front leg, and was adjudged lbw. Recalling Rohit’s wicket Shaheen said,

“We all know Rohit Sharma is such a dangerous player. In my mind, I keep bowling yorkers and maybe he’s troubled. When Rahul got the single and Rohit came on strike, my mind straight away said I can bowl this yorker. Maybe he misses. If there’s a little bit of swing I can get him.”

Shaheen Afridi finished the match with bowling figures of 3/31, dismissing the openers and Indian skipper Virat Kohli. He won the Player of the Match for his brilliant performance.