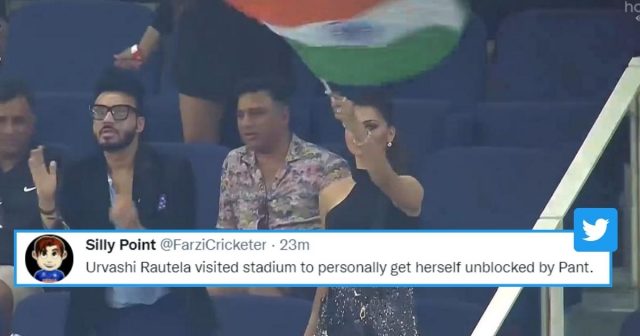 The India-Pakistan game in Dubai saw a moment of beauty as the cameraman panned around Bollywood actress Urvashi Rautela cheering for the Indian team. Shikhar Dhawan and Akshay Kumar was also seen cheering for India alongside Urvashi. The Bollywood actress was recently clicked alongside Rishabh Pant and thus showed her support when Pant stroke a delivery for a boundary.

Twitter was buzzing with the sight of Urvasi Rautela who is egging the Indian team along with other superstars from the stands.

Give the Man of the Match to the cameraman already !!!#INDvPAK pic.twitter.com/zTHTgmAiPv

Urvashi Rautela in the Stadium !! pic.twitter.com/FzX0ogxxgO

Urvashi Rautela visited stadium to personally get herself unblocked by Pant.

Cameraman doing a lot of badmashi. Shows Urvashi Rautela as soon as Pant hits the boundary.

Pant then added a 53-run stand before falling out to Shadab Khan. In his innings, the southpaw hit two one-handed sixes to lift the mood of the Indian supporters in the ground. However, his wicket shocked the Indian fans once again as Virat Kohli is anchoring the Indian innings to get to a defendable score.