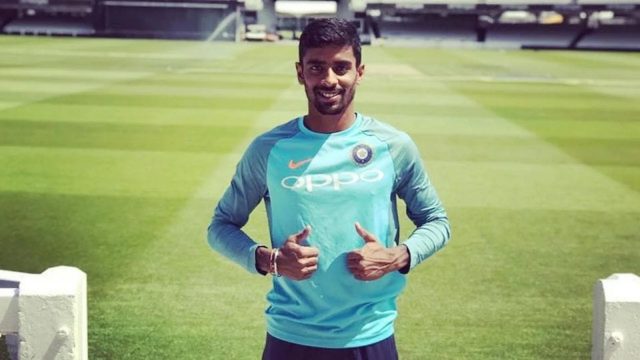 Bengal captain Abhimanyu Easwaran affirms that his team is upbeat after registering a thrilling four-wicket victory against Baroda in their Ranji Trophy season opener at Cuttack’s Barabati Stadium on Sunday.

Chasing a record target of 349, after being embarrassingly bundled out for 88 in their first innings, Bengal began their second innings essay on a positive note as Easwaran (79) and Anushtup Majumdar (33) remained unbeaten on a 57-run partnership for the third wicket at stumps on the penultimate day.

It boiled down to them needing 203 runs for a win on the final day, but the dismissals of Easwaran, Majumdar and Sudip Chatterjee in quick succession gave them an early jolt. Eventually, the rescue act was accomplished by Bengal cricket’s new “crisis man” Shahbaz Ahmed (71) and debutant Abhishek Porel (53) who stitched an unbroken 108-run partnership for the seventh wicket to steer their side home. Veteran batter Manoj Tiwary, too, contributed a handy 37 to the outright win.

Bengal will take on Hyderabad in their second Elite Group B fixture at the same venue from Thursday. Given the curtailed format of the tournament this season, the match promises to be a virtual knockout as only one team from this group will make it to the quarter-finals. Like Bengal, Hyderabad also secured an outright win against Chandigarh in their first match. However, they’ll miss the services of Hanuma Vihari, who has joined the Indian Test team for the home series against Sri Lanka, and the injured left-arm pacer Chama Milind.

In an exclusive chat with cricfit.com on the eve of the match, Easwaran spoke about the “new-gen” Bengal team, the fearless approach of the players and his Test match ambition. He also mulled the possibility of Wriddhiman Saha joining the team if Bengal reach the knockouts of the Ranji Trophy. Here are the excerpts.

Q: Congratulations on the win against Baroda in your Ranji Trophy season opener. How is the mood in the Bengal camp before the crucial match against Hyderabad that starts from Thursday?

Easwaran: We’re very happy to begin the way we did, especially after being all out for just 88 in our first innings. We managed to pull off the highest ever run chase for Bengal in the Ranji Trophy. It was a great feeling and the best part was that the bowlers brought us back into the game despite resting for only 30 to 35 overs. They bowled their hearts out and they’ve been our most consistent match-winners lately. Also, the way Shahbaz and Abhishek finished the game was exciting to watch. That shows the character of the team.

Q: It’s important that you’re talking about beginning well because you said a couple of years back that Bengal don’t reach the knockouts of the Ranji Trophy enough due to poor starts in the tournament. Has that tradition changed since the 2019/20 season?

Easwaran: If you see, we didn’t start well in the Baroda match either, but the comeback was great. If we have the ability to win a game from any position, I think that’s very special for us as a team.

Q: What was the talk in the dressing room after Bengal were bundled out for 88 in the first innings? Did your coach Arun Lal deliver a pep talk?

Easwaran: In cricket, such collapses can happen any time, but we had the faith that we could chase down whatever target they would set us in the fourth innings. We kept our heads high and got them all out for 255 in their second innings. I think it was important for us, including those who weren’t playing and the support staff, to believe that we could chase down the target. The talk in the dressing room was very positive, which I think played a huge role [in Bengal’s win].

Q: A former Bengal captain recently said that the lack of self-belief is the primary reason behind Bengal’s trophy drought on the domestic circuit. Do you think your team’s performance over the past two seasons has proved this notion wrong?

Easwaran: I don’t know who said what. I believe in this team. If you look at our performance since the start of the 2019/20 season, you’ll find that this team has come back from behind to win several matches. A lot of new boys have come in and won matches for us. Our fast bowling unit has been amazing; I don’t think they [the pacers] have played even fifty games in total. They’re relatively new, but the kind of impact they’ve made is simply outstanding.

Bengal cricket is no longer about individual performances; we perform as a unit now. This is the biggest change. It’s good to see guys like Shahbaz and Abhishek putting their hands up and seeing the team through. These guys are playing fearless cricket and it’s reflecting in our performance. I know we haven’t done too well in white-ball cricket, but we won crucial matches against strong teams like Mumbai and Karnataka last year.

Q: The Hyderabad match promises to be a virtual knockout for you people. Hyderabad will miss the services of Hanuma Vihari, who has been called up to India’s Test squad for the home series against Sri Lanka. Will his absence be a massive advantage for Bengal?

Easwaran: The mindset is the same. We’ve certainly formulated plans for Hyderabad’s batters and bowlers. Let’s see how well we can execute them. I think it’s just about recovering well and going into the match with a fresh mindset.

[On Vihari’s absence] He has been an important player for Hyderabad, especially in first-class cricket. But we are good enough to beat them with or without Vihari in their side.

Q: What is your assessment of young Abhishek Porel’s performance on debut?

Easwaran: When you make your debut, the dressing room is not too sure about you. He was a backup player for India’s U-19 World Cup-winning squad in the West Indies and has performed quite well for Bengal’s U-19 team. We did believe in him, and the way he kept [wickets] and batted in the game have given us more confidence. We knew that the partnership between Shahbaz and Abhishek would fetch us quick runs because they’re both stroke players. It was amazing to see him bat so confidently on debut and we expect him to be a star of Bengal cricket in the near future.

Q: You’ve been performing decently in white-ball cricket for quite some time now, yet an IPL contract eluded you at the mega auction. How upsetting was it? Did you expect yourself to be picked this time, with the addition of two new franchises?

Easwaran: Again, that’s not in my hands [laughs]. I watched the auction, but I didn’t have any expectations. I always concentrate on what I have in my own hands, so currently I’m only focused on Bengal’s Ranji Trophy campaign.

Q: Do you think getting an IPL contract has become necessary for being noticed for India’s limited-overs set up?

Q: Do you think the media, especially the local media in West Bengal, are responsible for stereotyping Abhimanyu Easwaran as a “red-ball player”?

Easwaran: I’ll be honest with you. I don’t read the newspapers, so I really don’t have any idea about what they say about me. You can’t change their perspectives about me, so there’s no use in thinking about it. I can only give my best and keep performing in whatever capacity I can.

Q: What do you have to say to your critics who undermine your white-ball stats?

Easwaran: I don’t have anything to say. I’ll try to perform to the best of my ability so that my performances can speak more than I do.

Q: Have you heard anything from Debashish Mohanty, the East Zone representative in the national selection committee, of late?

Q: Do you have any personal targets in mind for the current first-class season?

Easwaran: I don’t think about targets as such. I’m only focused on taking my team to the knockouts [of the Ranji Trophy] and we’ll see what happens after that.

Q: Even though Bengal finished runners-up in the previous edition of the Ranji Trophy, you didn’t score a lot of runs. Do you think the fifty in the second innings of the Baroda match has been a big confidence booster for you?

Easwaran: I always feel confident about my batting. It’s a positive sign for the team because we haven’t done too well as a batting unit in the past. If we come together as a batting unit, we’ll become a tough side to beat in the tournament.

Q: There’s a long queue for the opening slot in India’s Test team at the moment. Are you open to batting in the middle-order for India if given a chance?

Easwaran: I can bat anywhere for the country, but for that, I first need to get a national call-up [smiles]. I batted at no. 3 for India A during our tour of South Africa late last year and finished as the second-highest run-getter in the series.

Q: You’ve already toured England, New Zealand and South Africa with the India A team. How has all the international exposure benefitted you as a batter?

Easwaran: I don’t think a batter can ever have a complete game, but these tours have helped me adjust to various conditions worldwide.

Q: You’re a senior in the Bengal team now. How much are you enjoying the responsibility of guiding the youngsters who’re now coming in?

Easwaran: I’ve always been a team man, so I share with them whatever knowledge I’ve gained by playing the game. I try to share with them all that I’ve learnt from my own coaches and my seniors when I first joined the Bengal team. My philosophy involves growing together as a team. If we can do that, I think we can conquer anything.

Q: Wriddhiman Saha isn’t part of the Bengal team for now due to personal reasons. Will you people request him to join the team if you reach the knockouts of the Ranji Trophy?

Easwaran: That’s too far ahead right now. We obviously want Wriddhi da to play for us, but it’s going to be a collective call. Let’s see how things pan out.