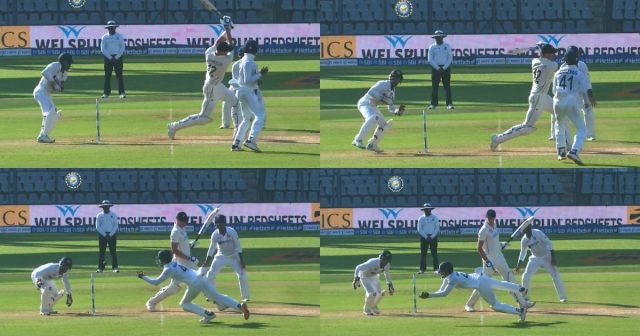 The wickets of Kyle Jamieson completed a sorry innings from New Zealand as they were bowled out for 62 in their first innings in Mumbai. This is now their lowest total against India ever in Test matches. India have opted to bat for the second time leading the game by 263 runs at the moment.

The Kiwis lost their wickets at regular intervals with none of their batsmen getting starts. The innings never really took off with Tom Latham and Ross Taylor getting out cheaply. Mohammed Siraj started the inroads as the other Indian bowlers got into their groove.

Meanwhile, it was Axar Patel who dismissed Jamieson to put an end to the Kiwi innings. The ball pitched in the rough and bounced sharply. The ball took the outside side off his bat as Shreyas Iyer completed an acrobatic catch after the ball bounced back from Wriddhiman Saha’s gloves.

Axar Patel Dismisses Kyle Jamieson To Bundle Out NZ For 62

Jamieson reviewed after he was given out only to find out that the decision stayed. A total of 16 wickets fell in the day’s play so far with The Kiwis getting bowled out inside two hours after bowling out India earlier in the day.

Lowest Test totals at the Wankhede

“I think I am very fortunate. The stars have aligned for me to have an occassion like that here in Mumbai. To be born here and come back here and do it is pretty special. I’m in very illustrious company, with Kumble sir as well,” said Ajaz Patel after joining Jim Laker and Anil Kumble as the third spinner to take 10 wickets in a Test innings.