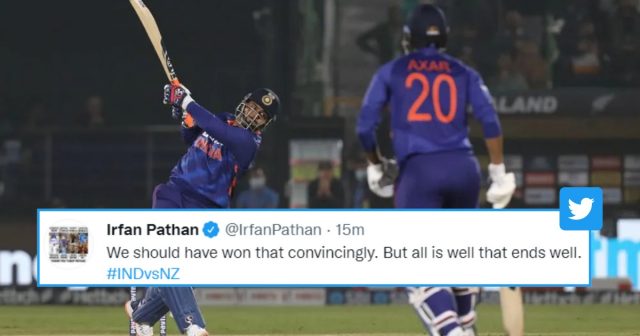 India beat New Zealand by five wickets in the first T20I in Jaipur to go one-up in the three-match series. Rishabh Pant finished the game off with a four to Daryl Mitchell to complete a sweet revenge of their defeat in the ICC T20 World Cup 2021. The game became too close for comfort in the end, despite skipper Rohit Sharma and Suryakumar Yadav making a substantial contribution by scoring fifties.

Set to chase 165, KL Rahul (15) and Rohit (48) added 50 inside the batting powerplay. Rohit then added another 59 runs with SKY who scored 62 off 40 balls. India then lost the wickets of Rohit and Surya pretty quickly needing 20-odd runs in the final four overs.

The Kiwi bowlers bowled in good areas and tied the game up. Needing 10 to win from the last over, Pant hit the winning runs in the fourth ball of the 20th over. Making his debut Venkatesh Iyer hit a boundary off the first ball he faced to help the equation for India. Earlier in the game, Rohit won the toss and asked the Kiwis to bat first. Without Kane Williamson and Kyle Jamieson, Martin Guptill anchored the innings scoring 70 off 42 balls. Mark Chapman scored his first fifty for the Kiwis (63) and added a 109-run stand with Guptill. It was their partnership that helped the Black Caps get to 165 in the end, which was edged over just by the Indian team.

The Twitterverse meanwhile enjoyed this Indian victory. The victory coming just after their World Cup defeat against the same team made it even more special.

This remind me – During the FIFA WC 2018, I preferred commentary in Bengali. "Ball ta pass kore diyechen…" made the match come alive for me

Good start for Team India with a hard fought win over New Zealand. Rohit Sharma led from the front. Ashwin showed his experience. Good outing for Suryakumar Yadav. Pant finished well. Hoping India changes their combination & gives other players a chance in the next game

Coach changed. Captain changed. But India haven't changed their habit of 'not learning from their mistakes'. #INDvNZ

We should have won that convincingly. But all is well that ends well. #INDvsNZ

Lovely! I get home and watch Rishabh finish the game. Good match to start the series. #INDvsNZ