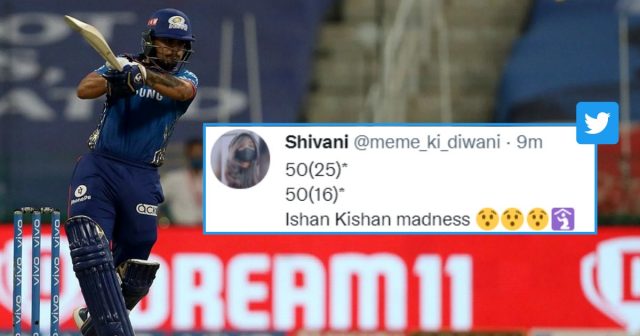 Ishan Kishan is keeping Mumbai Indians in the hunt in their last league game against Sunrisers Hyderabad. In a must-win game for the defending champions, Kishan raced to a fifty off just 16 balls hitting eight fours and two sixes in the process. Kishan has found his lost form. He has scored the fastest fifty in this IPL season off just 16 balls and is not finished yet.

Mumbai Indians won the toss and opted to bat first. Rohit Sharma, at the toss, looked at the near-impossible equation of making the playoffs. he also looked back at a season of ifs and buts for Mumbai Indians.

“The numbers are pretty scary, but we are going to give it all. Let’s hope we can come out and do what we love to do. It’s important to enjoy the game as well. It’s been an on-and-off season for us. This is a great opportunity for us to do something that’s never been done before. Our batters have’t come collectively and performed as a team in the UAE leg. But these guys have done exceedingly well for respective teams” said Rohit.

Half century in just 16 balls
My king Ishan Kishan is here to rule 👑 pic.twitter.com/gn6nJL4sv4

Don’t forget that this youngster was dropped after a streak of low-scoring matches and was not backed. What a slap, Ishan Kishan. What a slap.

Meanwhile, promotion in the batting order has worked wonders for Kishan. He has scored two back-to-back fifties. Kishan was benched after a string of failures. Since his comeback, he has been batting like a dream and has continued against Sunrisers as well.

Manish Pandey at the toss explained the reason behind him walking out at the toss. He spoke about Kane Williamson picking up an elbow niggle and Bhuvneshwar Kumar Yadav also picking up a niggle.

“My first game as IPL captain. Last minute call. Kane had a niggle on his elbow, Bhuvi has a niggle too. We would have batted first too. We will look to bowl first and look to give Bombay little chance. I know they are going to come all guns blazing but we are ready” said Pandey.