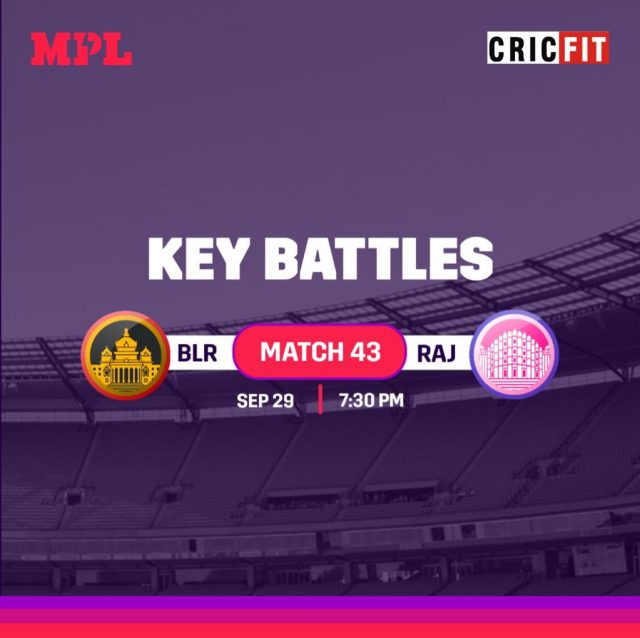 Virat Kohli’s Royal Challengers Bangalore (RCB) will go up against Rajasthan Royals (RR) in match 43 of IPL 2021 at the Dubai International Cricket Stadium in Dubai. While RCB will look to consolidate their position in the top four of the points table while RR will be desperate to secure two points to keep themselves floating for a playoff spot.

RCB will be oozing with confidence after Glenn Maxwell’s all-round show with bat and ball. Devdutt Padikkal and Virat Kohli have been solid at the top, providing RCB with strong starts. They will hope their overseas all-rounder to deliver his good which will make RCB a force to reckon with.

Meanwhile, RR has been struggling due to their misfiring middle-order. The Royals will hope Liam Livingstone to fire, who has had a lean patch so far in the UAE leg of IPL 2021. The bowlers have done a decent job, however, the batters will have to step up to the task to get the desired results.

On that note, let’s take a look at 3 key battles from the RR vs RCB tie in Dubai for MPL fantasy cricket:

RCB superstar AB de Villiers has looked off-colours so far in the second phase of IPL 2021. The former Proteas cricketer will be desperate to hit the strides as the franchise look to consolidate their position in the top four.

However, de Villiers is likely to face a stiff competition from leg-spinner Shreyas Gopal, who has got AB de Villiers out four times in six meetings.

It will be interesting to see who comes out on in Dubai on Wednesday.

RR captain Sanju Samson has leading the batting on his own shoulders. The likes of Mahipal Lomror, Yashasvi Jaiswal have got starts but failed to capitalise on it.

Samson will once again have to lead his team from the front against a star-studded RCB line-up. On the other hand, Yuzvendra Chahal, who has got the better of Sanju Samson five times out of nine meetings, will be keen to better his records.

It will be an interesting match-up to witness when RCB lock horns with RR tonight.

Shreyas Gopal made the RCB skipper his bunny during IPL 2020 cleaning him with his googlies. Will Gopal likely to slot back in the playing XI against his favourite opposition, this will be a mouth-watering duel to watch.

Kohli has managed to score only 33 runs against Gopal in nine meetings while the leg-spinner has got him out on five occasions. It will be interesting to see who ends up on top in Dubai.