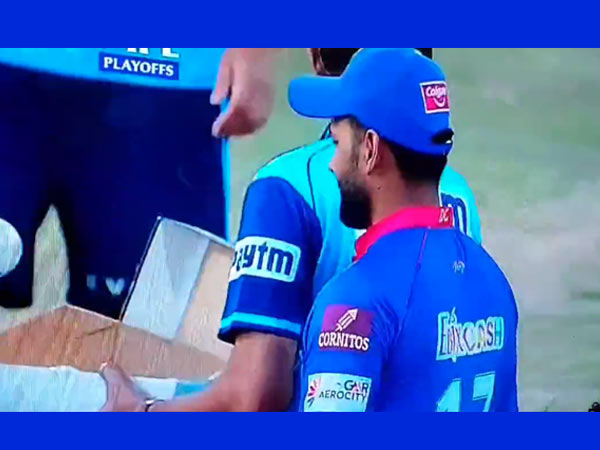 Meanwhile, Rishabh Pant, being the funny boy that he is, played a prank on umpire Anil Chaudhary just after the toss. While returning back from the toss, he just nudged the umpire on the wrong side as he moved around to see who he was. The umpire completely looked baffled, but Pant calmed him down and revealed that it was him as the match official smiled.

A random Twitter user tweeted the same video with the caption ” “24-year-old kiddo,” reflecting on the prank played by Pant.

We Would Have Liked To Bowl First On This Wicket: Rishabh Pant

Meanwhile, both captains wanted to bowl first after winning the toss given the track record in Sharjah with respect to teams chasing.

” We would have bowled first. It’s fine, we can’t be thinking about the toss too much, so let’s play some good cricket today. There’s nothing we wanted to change from the last game, just one or two overs here and there would have done us the job. We needed an extra batsman in these kind of tracks, so Stoiniscomes in. Tom Curran is out. We are in a great frame of mind, always exciting to play together, always having lot of fun, looking to have fun during the match also” said Rishabh Pant after losing the toss.

Morgan meanwhile, said that heading into the playoffs all the players are aware of their roles in the team which makes them a settled unit.

“Guys know their roles inside out, so hoping to come here today and produce something close to that. Playing DC will be a good test. The mindset that we have had throughout the second phase has been spot-on, guys have looked to play aggressive, smart cricket, which is great. We really enjoyed playing here and hopefully it has put some smiles on people’s faces as well” said Morgan.