The 14th edition of the Indian Premier League (IPL 2021) is just around the corner. Everyone is gearing up for the mouth-watering clashes and fierce rivalries between the 8 teams which commence on April 9 (Friday). It is going to be an absolute roller coaster ride as we all look forward to the next 2 months of enthralling matches and great cricket.

We are all aware of what a vital role spin bowling has played and the impact that spinners have on the success of their teams. Many great spinners have played this tournament over the years and have had a great impact. We are going to analyze the different spinners who are going to take part in IPL 2021 and try to figure out who among them has been absolutely phenomenal over the course of the tournament over the previous years.

We are going to be comparing bowlers on the basis of their Strike Rates and Economy Rates. But before diving into the analysis let’s understand what the terms mean.

Bowling Strike rate – It is defined as the number of balls bowled per wicket taken. A low strike rate means that the bowler has a knack of picking up wickets. Eg-Suppose a bowler has bowled 2000 balls in his career and has taken 50 wickets, his strike rate will be 40.

Economy Rate – Number of runs conceded for each over bowled. A lower economy rate means that the bowler has given away fewer runs in the overs that he has bowled. Eg-Suppose a bowler concedes 40 runs in 4 overs then his economy rate is 10.

The following table shows the Strike Rate and Economy Rate of different spinners in the IPL over the years:

The following graph shows the comparison of the Strike Rate v Economy Rate of different spinners in the IPL. 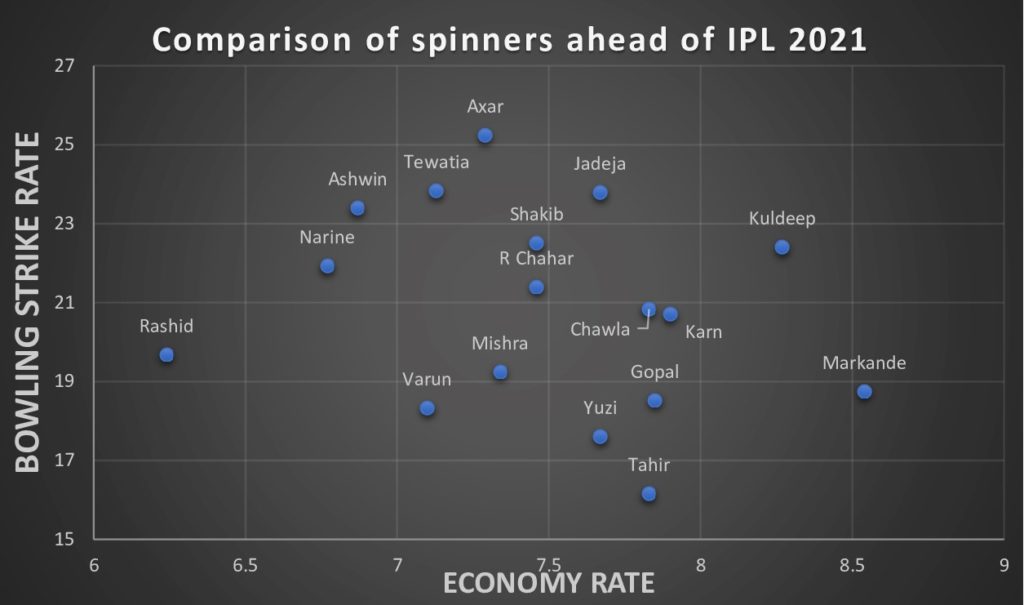 Rankings the spin bowlers ahead of IPL 2021:

In this graph, it is clearly visible that Rashid Khan is in a league of his own. Rashid Khan has the best economy rate amongst all the spinners and also has a decently low strike rate making him one of the top spinners in the IPL. Batsmen usually tend to try and play out his overs and not give him a wicket therefore he concedes very few runs thus putting pressure on the batsman to score vs the other bowlers which very often leads to a wicket.

Imran Tahir has a relatively higher economy rate but he makes up for that with his extremely low strike rate. He gets a wicket for his team very often in crucial stages of the game and helps them win. Varun Chakravarthy also has been doing really well with his breakthrough season being the IPL 2020. He has a strike rate lower than Rashid Khan and a decently low economy rate as well thus making him an important asset for his team.

Sunil Narine is another example like Rashid Khan. Batsman usually try to play extremely cautiously during his overs thus not giving away their wicket hence his strike rate is a little high but the economy rate is very low which means that he doesn’t give away too many runs to the batsman and builds pressure. Narine and Kuldeep will combine to guide Kolkata Knight Riders to the title in IPL 2021.

Kuldeep Yadav has been a disappointment in the IPL over the last few seasons he has an extremely high economy rate and his strike rate is on the higher side as well thus making him one of the spinners who has not been able to do too well in the IPL. He will be desperate to deliver the goods for Kolkata Knight Riders in IPL 2021 and make a claim for a spot in the national team.

Axar Patel’s main role for Delhi has been to contain the runs in the middle overs. He does not have the knack of picking too many wickets but, he does slow down the scoring rate.

There are many spinners in the IPL who have been great. Some of them slow the scoring rate while some of them pick up wickets often. The standout bowler however who has been able to do both is Rashid Khan, therefore, he is one of the best spinners to play this tournament and it will be interesting to see what impact will he have on IPL 2021.