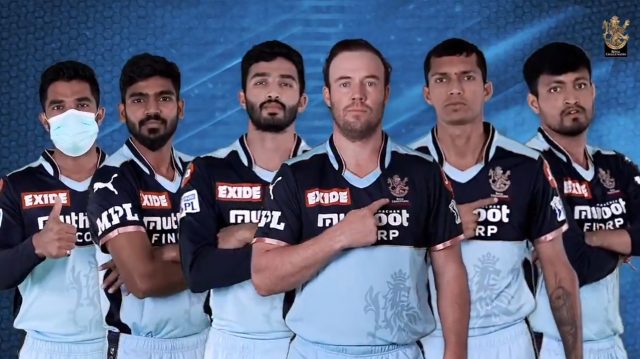 The Indian Premier League franchise, Royal Challengers Bangalore will be sporting a blue jersey in the match against Kolkata Knight Riders to pay their tribute to the covid-19 pandemic frontline workers.

The Royal Challengers Bangalore took to social media to make the announcement. They posted a video, captioning it as:

We at Royal Challengers Bangalore are honoured to sport the Blue kit, which resembles the colour of the PPE kits of the frontline warriors, to pay tribute to their selfless and invaluable service while leading the fight against the Covid pandemic.”

The Royal Challengers skipper Virat Kohli stated that the franchise has decided to wear the blue jersey to show support to the frontline workers, instead of their flagship green jersey for the GO Green Initiative. He said,

“Instead of our flagship Go Green match initiative this season, RCB is going to be sporting a special blue jersey in one of the upcoming matches with key messaging on our match kits to show solidarity and support to our frontline workers.”

Earlier this year, the Virat Kohli-led franchise joined hands with the Give India Foundation to provide oxygen concentrators in Bangalore, and other cities. Their parent company, Diageo India has manufactured and distributed 3 lakh litres of sanitizers and committed 75 Crores INR to support the Indian hospitality sector.

The Royal Challengers Bangalore are third on the points table, with five wins in seven games in IPL 2021 so far. They will resume their campaign on September 20 against the Kolkata Knight Riders at the Sheikh Zayed Stadium in Abu Dhabi.