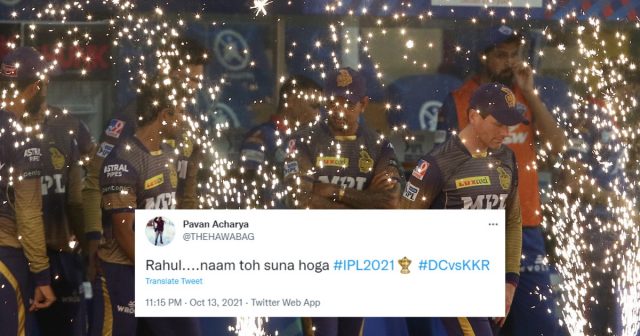 In a nail-biting last few overs, Delhi Capitals kept Kolkata Knight Riders (KKR) on the brink of a potential loss from a winning position before KL Rahul hit a six off the fifth delivery of the 20th over to take KKR to the final. They now face CSK on October 15 in Dubai.

Ravichandran Ashwin came up to bowl the final over with seven required of the final over. He dismissed Shakib AL Hasan and Sunil Narine of back to back deliveries and was on a hat-trick on the delivery which went for a six.

The KKR middle order of Eoin Morgan, Dinesh Karthik, Shakib and Narine scored ducks after the openers added a 96-run opening stand. Nitish Rana scored 13 off 12 balls and at last, it was Rahul Tripathi who hit the winning runs scoring 12 off 11 balls.

An historic collapse from KKR. Huge pressure from Delhi Capitals to drag themselves back in. A nerveless final six from Rahul Tripathi, on a hat-trick ball.

A stunning climax – what a way to reach a final.#IPL2021 #KKRvDC

Ducks for three impact overseas players. And a cool six to finish from a young Indian batsman. That’s been the story of the @IPL #DCvKKR

“It feels great. The win for the team was very important. We had one or two tough overs and I never thought it would go so deep. Glad we won the game. Rabada bowled the 18th over really well, but I knew that I had to just connect one. The plan was to take a two if there was a possibility. If it was two, we were running, otherwise it was going to be me. It was difficult to straightaway get singles and boundaries for the new batsmen. It was keeping low and it was difficult to hit. I believed in myself and knew it was just one hit away. It has been a great journey for us after the first phase. We believed in ourselves and the approach given by Eoin and the coach helped us with the positive approach” said Tripathi in his post-match interaction.