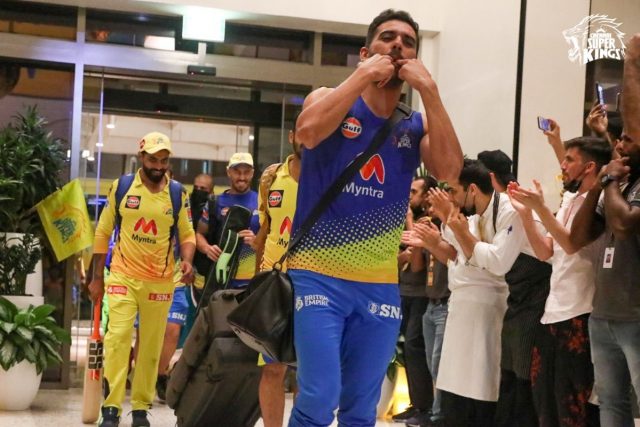 Chennai Super Kings became the first team on Sunday to qualify for the finals of the Indian Premier League 2021. They defeated the Delhi Capitals by 4 wickets, as MS Dhoni finished off the game with a boundary in the last over.

The Chennai Super Kings team received a grand welcome at their hotel after the win. The players walked into the hotel amid applause and whistles. They were greeted by the support staff members and the families of the players. There were chants of “CSK CSK” at the hotel. The official social media handles of the franchise posted a video of the grand welcome. They wrote, “Anbuden Welcome at the #WhistlesKingdom”

The Chennai Super King had a disastrous season of Indian Premier League 2020. They failed to qualify for the playoffs and were seventh on the points table. However, they have been able to truly change their fortunes this season. Skipper MS Dhoni credited the turnaround of this season to the whole Chennai Super Kings squad. He said,

“It’s the full team (effort). It was tough when we didn’t qualify last time. Emotions were quite high. Forget what has happened till now, we wanted to make the most of the 3-4 games left towards the end. A lot of our batters made the most of that period which is why I feel we have come back strongly this year. Credit goes to the support staff and everyone in the team. Without their character, you can’t really come back like this.”

MS Dhoni’s CSK will now get a good four days of break before their final clash on October 15 in Dubai.