Delhi Capitals are currently placed second in the IPL 2021 points table and take on Kolkata Knight Riders on Tuesday. A win against KKR would take DC back to the top of the table and guarantee them a spot in the playoffs. The side has won all their games in the UAE leg so far and look good to win against KKR as well

Meanwhile, the players are relaxed in the Delhi Capitals camp and there is a positive energy running within the camp. Capitals pacers Ishant Sharma, Avesh Khan and Lukeman Meriwala took on the “Hit The Bottle Challenge”.

DC Squad's motto: You've got #OneLife. Stay hydrated, re-energized and ace every challenge Like. A. Boss 😍

Both Ishant and Meriwala failed to hit the target on their first attempt. While the latter redeemed himself in the second instance, the veteran Indian seamer failed to emulate the left-arm pacer and returned with zero points. Young pacer Asvesh Khan hit the target on both occasions.

Meanwhile, Delhi Capitals have already beaten KKR in the first phase of the IPL. This is a must-win game for Kolkata as are their remaining games. A loss against the dominating Capitals might make their road to the playoffs all the more difficult. 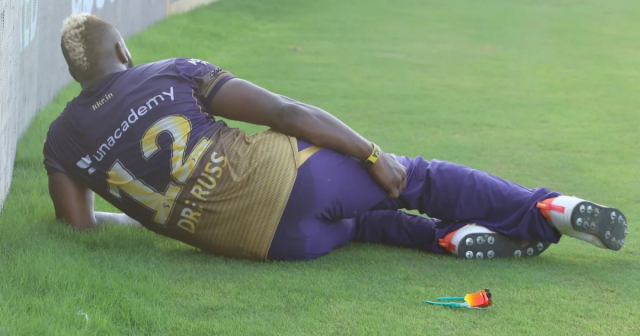 KKR all-rounder Andre Russell is doubtful for the crucial clash against Delhi Capitals. He injured his knee in KKR’s match against CSK in the 17th over of their chase.

David Hussey, the KKR mentor, believes that it is too early to say whether or not the Jamaican would be ready for the next game against the Delhi Capitals.

“It’s still too early to tell. He said he felt something pop in his leg, his hamstring. We’ve got the best medical staff in the business so they’ll tend to him and hopefully it’s nothing too serious, because he’s a key part of our team.He’s been playing very very nicely with the bat, the ball, and in the field. So hopefully nothing too serious and he can come back and light the competition up like we know Andre Russell can do”-said Hussey.