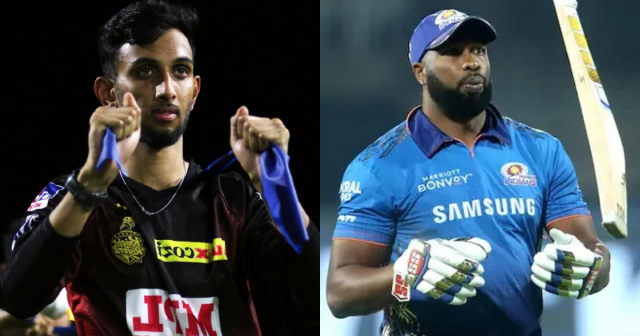 Last night, the Kolkata Knight Riders (KKR) put on a fantastic show, defeating the 5-time IPL Champions, Mumbai Indians (MI) by 7 wickets. KKR displayed incredible determination and were fantastic in every facet of the game.

The game was a complete spectacle, however, during the contest, Mumbai Indians batsman Kieron Pollard and Kolkata Knight Riders pacer Prasidh Krishna were seen having a verbal brawl. The conversation started after Prasidh Krishna bowled the final ball of MI’s 15th over.

After Quinton de Kock’s wicket, Kieron Pollard stepped out to bat at number 5, defending a full-length delivery back to Krishna, who failed to catch the ball but continued to sprint towards the batter with his hand up. Kieron Pollard was clearly infuriated by Prasidh Krishna’s behaviour.

As a result, the two players got into each other’s faces and had a heated argument. However eventually Prasidh chose not to prolong the argument, so he put on his cap and walked out.On social media, fans have been widely sharing the video of what happened between the two.

It didn’t end there. Later in the game, when Pollard took a single and reached the non-striker end, the camera caught the two in a tense moment once more. As Prasidh returned to his run-up, Pollard kept looking at the KKR pacer. Prasidh then looked at the umpire and lifted his arm in the air, as if to question, “What is going on?”

KKR Moves to the Top 4 in Points Table

Meanwhile, Pollard scored 21 off 15 balls, including two fours and a six, as MI reached a total of 155/6. Kolkata Knight Riders responded by successfully chasing down the score in just 15.1 overs, winning by 7 wickets. After this match, KKR has climbed to fourth place in the points table, while Mumbai Indians have slipped to sixth place.