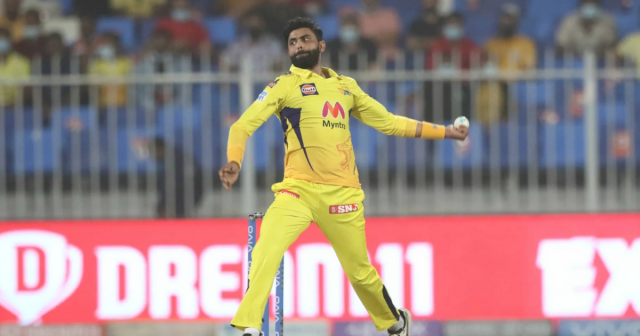 On Friday in Sharjah, a hilarious incident occurred between Chennai Super Kings all-rounder Ravindra Jadeja and umpire Anil Chaudhary, who was officiating in the CSK vs RCB clash.

The incident occurred on the fourth ball of the 11th over, when Ravindra Jadeja bowled a quicker delivery outside the off-stump to RCB batter Devdutt Padikkal. The southpaw who has been in sublime form was getting ready to hit the shot as he moved across his off-stump.

However, Padikkal chose to leave the ball at the very last second, withdrawing his cut shot, as the delivery continued to go wider. But to everyone’s amazement, umpire Anil Chaudhary did not call it wide. Ravindra Jadeja, pleased with the decision which turned out in his favour, patted the umpire on the back twice on his way back to the bowling mark, expressing his respect and appreciation for the umpire.

The video of the same has gone viral on the internet:

Coach Mike Hesson and Captain Virat Kohli address the team after a tough loss against CSK, and identify areas to improve ahead of the all important fixture against MI on Sunday.#PlayBold #WeAreChallengers #IPL2021 pic.twitter.com/1vhVt44sU1

After winning the toss, MS Dhoni asked RCB to bat first.RCB got off to a flying start thanks to a 111-run partnership between Virat Kohli and Devdutt Paddikal for the first wicket. In the 14th over, RCB were 111 for no loss.

But, thanks to Dhoni’s captaincy, everything changed for Chennai Super Kings. He put the correct fielders in the correct positions and gave the ball to the right bowlers who were suited for those conditions. This meant that Royal Challengers Bangalore were limited to just 156 runs in 20 overs.

In response, CSK put together a similar first-wicket partnership. Ruturaj Gaikwad and Faf du Plessis added 71 runs for the first wicket. During the middle overs, Chennai appeared to be in trouble, but they recovered and won the match by six wickets with eleven balls to spare. Now the Chennai Super Kings are most likely to ensure a playoff spot with one more victory in upcoming matches.