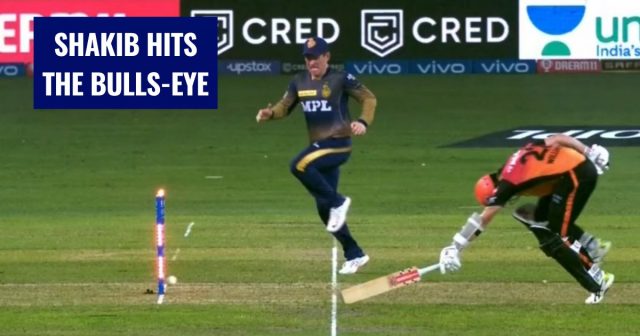 KKR are playing Sunrisers Hyderabad in a crucial game in Dubai. They need to win the game to keep their playoff chances alive. They have taken three key wickets inside the powerplay and one of them was Kane Williamson. Williamson was playing with great intent until the moment he was run out by Shakib Al Hasan.

Coming into bowl his first over, Shakib gave away four runs and ran out Williamson. The SRK skipper nudged the ball to short mid-wicket and took off for a risky tun. Shakib was quick to gather the ball and hit the bull’s eye to catch Williamson short of his ground.

Shakib has been drafted into the side to strengthen KKR’s bowling options. His inclusion has paid instant dividends as this was KKR took three wickets inside the power play which is their best in the second leg of the IPL.

Meanwhile, injury concerns to Andre Russell and Lockie Ferguson has kept the management thinking. This is the second game in which both the player are missing from action.

Kane Williamson won the toss and opted to bat first. The side is already out of playoff contention and playing for pride.

“We’re going to have a bat. It looks like a reasonable surface and it won’t change much so we’ll make use of it with the bat. It’s an unfortunate position to be in but there’s quite a bit to gain with growth of players, in difficult conditions, especially against a side like Kolkata. Umran Malik comes in for Sandeep Sharma just to improve the balance of the side. He’s an exciting fast bowling talent” said Kane.

Eoin Morgan spoke about his team needing to win the game and making it to the playoffs. He also spoke about his batting form which has taken a dip in the season and hugely criticised.

“Being an experienced player, the worse your form gets, the closer you actually get to a good score, so I’m hoping to turn things around and contribute to a win. I think we did a good job in the second phase, gathering momentum and playing some really good cricket. I think if we get past the challenge that SRH pose today we’ll be in an even better space. Tim Seifert goes out and Shakib comes in to improve the balance on the all-round front since he contributes with the ball as well. We probably fell short with the ball the other night and Shakib fills that void” said Morgan.