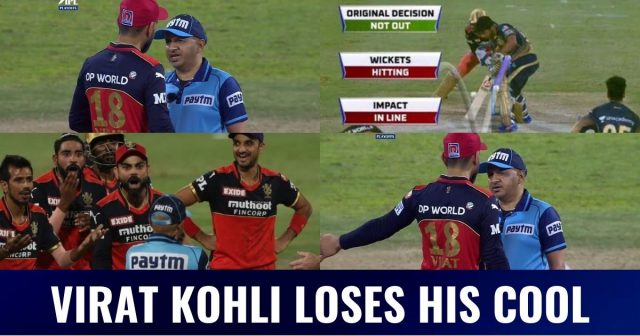 Virat Kohli is leading RCB against KKR in what might be his final game as Banglore skipper. Kohli has often had animated conversations with the umpires and it was another such occasion in the knockout game against the two-time champions. Kohli had an animated chat with umpire Virender Sharma over the wicket of Rahul Tripathi.

Coming into bowl the seventh over of the KKR innings, Yuzvendra Chahal bowled a googly which Tripathi failed to read. Umpire Sharma ruled it not out which was then referred by Kohli. The third umpire ruled it in favor of Kohli’s side, this is when the excitement began.

Virat Kohli lost his cool at umpire's for their poor decisions.

Despite, RCB picking up a wicket, Virat Kohli was not ready to get over it. He went on confronting with the umpire trying to make Kohli understand why he gave the decision.

An over later, umpire Virender Sharma went upto Kohli again and kept his side of the story. At the end of it all, Kohli accepted the umpire’s decision and decided to move on with the game.

Meanwhile, the game is getting interesting in the final few overs with Kolkata requiring 13 runs from the last 15 balls. In the end Kolkata won the game and made it to the second qualifier eliminating RCB in the process.

“I have tried my best to create a culture here where youngsters could come in and play with freedom and belief. It is something I have done with India as well. I have given my best. I don’t know how the response has been, but I have given 120% to this franchise every time, which is something I will now do as a player. It is a great time to regroup and restructure for the next three years with people who will take this ahead. [On him staying with RCB] Yes definitely, I don’t see myself playing anywhere else. Loyalty matters more to me than worldly pleasures. I would be in the RCB till the last day I play in the IPL” said Virat Kohli on stepping down from captaincy.