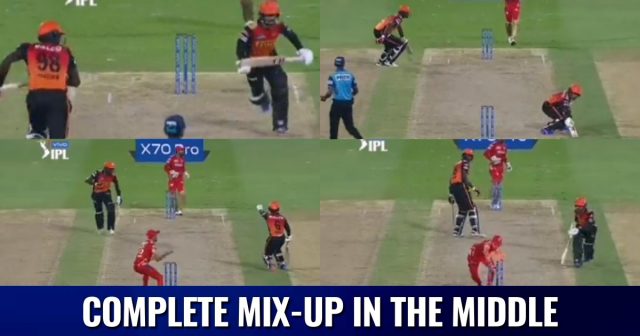 Wriddhiman Saha after holding on the chase together for Sunrisers Hyderabad lost his wicket via a runout. SRH in the process have been pegged back in the chase. Saha scored 37 off 31 deliveries and was run out at the wrong time for his team’s cause. SRH, meanwhile, will not make it to the final four if they lose this game.

Wriddhiman Saha nudged the ball just outside the 30-yard circle and was hesitated for the second. Seeing Jason Holder halfway down, Saha also went for the double but fell short at the non-striker’s end on his return.

The Punjab bowlers have taken wickets at the right time to keep the SRH run-chase in check. Ravi Bishnoi also took three wickets inn the middle-overs to not really let SRH get ahead of the asking rate.

In the end, Punjab Kings defended 17 off the final over and won the match by five runs. Nathan Ellis kept his cool and gave away 11 runs as Punjab won the game by 11 runs and kept their playoff chances alive.