England pacer Jofra Archer managed to shut down a troll on Instagram by after the pacer was racially abused by a random user on the app. The user said that the jewelry and the watch which Archer wears while playing is ‘probably stolen’.The user abused Archer and used foul words to describe his jewelry and watch, which he wears during matches. 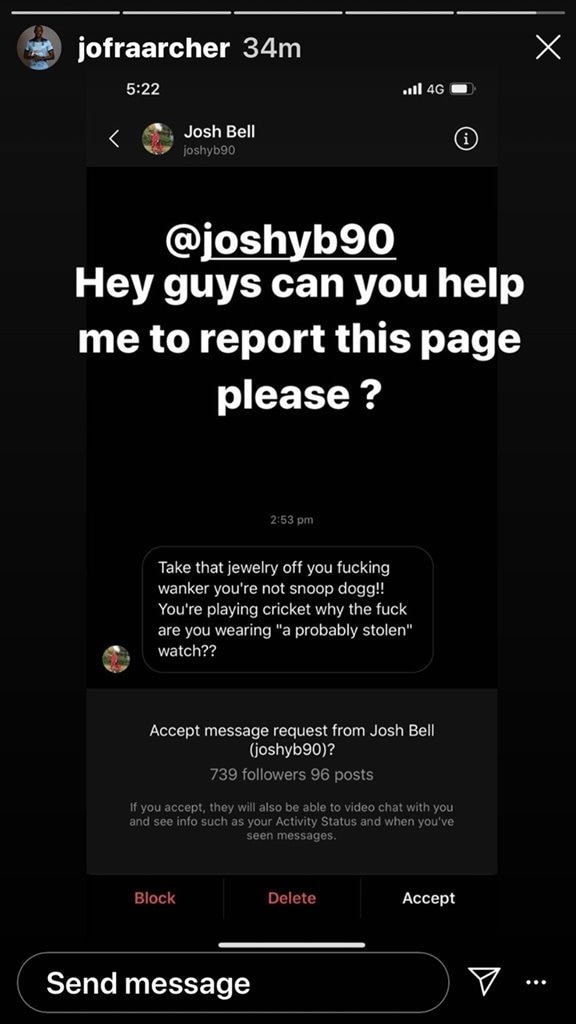 Archer was quick to share the screenshot of the same and asked his followers to report the account. “If you are thinking that when you are drunk you were always thinking it” was Archer’s reply to the user to tried to racially abuse him.

This is not the first time, Archer has found himself in the middle of racial abuse. He was abused previously on the internet when he broke the quarantine rules and paid a visit to his home during England’s Test series against West Indies.

Soon after reporting the account of the Instagram user, Archer received an apology from him. “Would like to send my full apologies with huge regret about some outrageous and ridiculous comments posted last night up late and drunk watching the cricket, mad at the Aussies collapse..no excuses disgraceful behaviour apologies once again,” the troll messaged Archer.

Meanwhile, the second ODI between England and Australia will be played in Manchester later today at 5.30 pm. Despite a brilliant century by Sam Billings (118 off 110 balls), England lost the match by 18 runs. Therefore this is a do-or-die game for Eoin Morgan and his men to stay aliive in the series.

Australia, on the other hand, will have Steve Smith available for the second game, after he missed the first due to a concussion injury. He passed the second concussion test and in all likelihood will be back batting at his familiar position of number three for Australia.