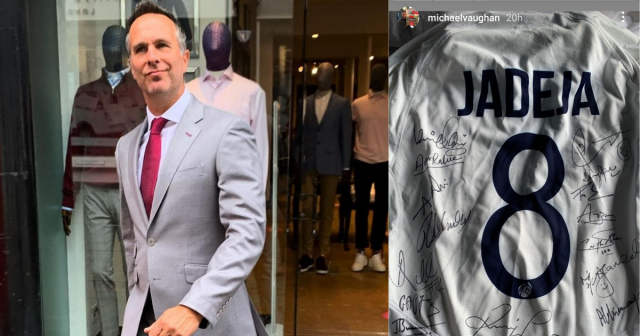 Ravindra Jadeja is currently part of the India tour of England five-match Test series. Notably, Jadeja has been given preference by Indian management over Ravichandran Ashwin. And Jadeja has so far played all three Test games against England. Also with bowl Jaddu has failed to do something very impressive. However, with the bat, he has been consistently putting some runs on the board.

Meanwhile, The gift which Jadeja gave to Michael Vaughan was a Test jersey but not any ordinary Test jersey. That jersey had the signature of all Indian players who are currently present in England for the Test series. Notably, the gift was for a charity event, however beneficiaries of the charity remain unknown.

Michael Vaughan was also very happy to receive a gift from an Indian all-rounder. He took Instagram to express his happiness and wrote: “Cheers @ravindra.jadeja, will make lots of money for a charity”.

Jadeja gifted his Test Jersey with the sign of all Indian players to Michael Vaughan for Charity works.

” I think Ravindra Jadeja might not play due to injury”: Brad Hogg

Ravindra Jadeja had injury concerns after the Leeds Test match. He was having some problems with his right knee and was taken for scans. Meanwhile, Brad Hogg believes Jadeja might miss the Oval Test against England. He stated:

“Look I think Ravindra Jadeja might not play due to injury, and not due to performance, just because he has got a slight knee injury. You can see that athleticism as high as it was previously not high. And you can tell that he was struck with an injury there,” Hogg said.

” I can see Ashwin batting at number seven replacing Jadeja and Shardul Thakur coming in at number eight. That would be a formidable batting line-up that India would like to have. These two players can do the job as Jadeja did, and they won’t be losing any batting depth there.”

“Shardul will offer more swing and, Ashwin will bring more spin and bounce with his off-spin. It adds a bit of variety to the English batters as well. So don’t be surprised if they make those changes to the next game. I don’t think Ishant Sharma will be playing the next game,” Hogg added.

Now the 5-match Test series is leveled at 1-1. Joe Root’s men and Virat Kohli-led India will be heading to Kennington Oval for the 4th Test which will begin on 2nd September 2021.