Hasan Ali is amongst the best bowlers ,Pakistan cricket currently have in their side. He was born on 2 July 1994 at Mandi Bahauddin, Pakistan. Hasan Ali recently turned 27 and his fans and mates made sure he enjoys the day his special day to the maximum extent. Ali received best birthday wishes from all around the world on his birthday.

Pakistan Cricket Board (PCB) was amongst the many who took Twitter to wish the fast bowler Hasan Ali on his special day. Meanwhile, things didn’t go well after Pakistan Cricket Board posted a happy birthday tweet for Hasan.PCB even got criticized for their tweet and were trolled heavily by fans on social media.

The Pakistan Cricket Board ( PCB ) posted a tweet in which they applauded Hasan’s achievements in cricket. PCB shared the number of matches played by Hasan Ali in ODIs T20Is and Test cricket. PCB also stated that Hasan Ali is the quickest bowler to pick 50 ODI wickets for the Pakistan cricket team.

Meanwhile, While posting the tweet for Hasan Ali, Pakistan Cricket Board made a huge mistake. The PCB added a middle finger Emoji in the special tweet which instantly caught the attention of cricket fans. They used middle finger Emoji in front of the text; “188 Wickets in International Cricket”. When PCB realized their mistake they instantly deleted the tweet. However, the damage was already done because Twitterati soon circulated the screenshot of the Tweet on social media platforms. And the tweet went viral on Social media. PCB was heavily trolled for making a huge mistake while wishing the pacer Hasan Ali. 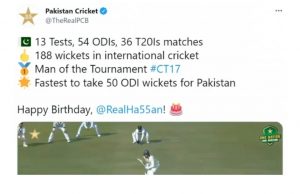 Recently The Pakistan Cricket Board has approached the ICC and has expressed its interest to host as many as six ICC events from 2024 to 2031. Pakistan’s board wants to host two T20 World Cups in the year 2026 and 2028 respectively. They want to host ODI World Cups from the years 2027 and 2031. Also, they want to host the Champions Trophy event in 2025 and 2029. The PCB statement read:

“The Board of Governors (BoG) was informed that the PCB has submitted an expression of interest for six ICC Events in the 2024-31 cycle. Of these six events, the PCB is keen to host the three-venue ICC Champions Trophy 2025 and 2029 on its own.