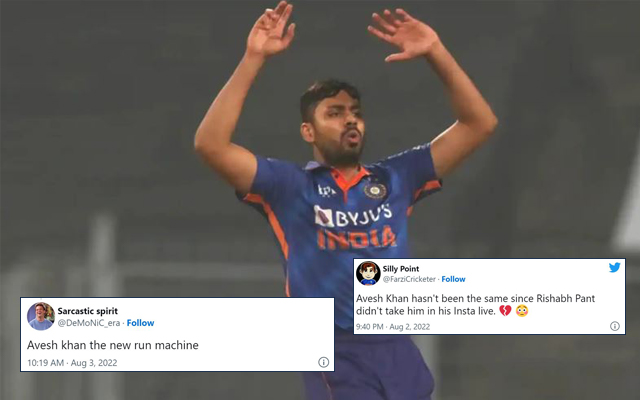 Team India registered a comprehensive win against West Indies in the third T20I at Warner Park in Basseterre, St Kitts on Tuesday, August 2. They chased 165 runs with seven wickets to spare to take a 2-1 lead in the five-match T20I series. While there were a lot of positives for India from the game, the team will be concerned about Avesh Khan’s performance in the series so far.

Avesh Khan did not get an opportunity in the first match. He replaced Ravi Bishnoi in the playing XI for the second T20I. However, so far, the pacer has been taken to the cleaners in the T20I series so far by the mighty West Indies batters. He has not been able to keep a check on the runs, proving to be very expensive for India.

In the third T20I, Avesh Khan went wicketless, conceding 47 runs at an economy rate of 15.7 in three overs. Apart from him, the rest of the bowlers did a decent job in the innings. India restricted West Indies to 164 runs in the first innings. In reply, they chased down the target comfortably with seven wickets to spare.

Avesh Khan also took the beating from the West Indies attack in the second T20I, where he conceded 31 runs in 2.2 overs. Bowling the final over in the second game, he failed to defend 10 runs after starting the over with a no-ball. Devon Thomas slammed him for a six and a boundary in consecutive deliveries to finish the match. So far, Avesh has conceded 78 runs in 5.2 overs in the series.

Let’s take a look at how the fans reacted to Avesh Khan’s performance:

Avesh Khan hasn't been the same since Rishabh Pant didn't take him in his Insta live. 💔 😳

On this tour, Avesh has been struggling to adjust to the relatively slow nature of the wickets in WI.

On these wickets, you need vary your pace more.

PK last series and now Avesh, two bowlers who have really been under the pump. Plenty of learning for them with the way things are going for them. Execution been very off. Hopefully wickets for Avesh to get him back to his best. More runs will only put more pressure.

Avesh Khan is a perfect example of IPL Bullies. These players are looks like superstars in IPL but mega flop in International cricket. #WIvIND

Avesh Khan in the death for India in T20Is (match-wise)

Avesh Khan is IPL merchant and one of the best Run Machines in International cricket. Just kick him out of the squad. Arshdeep Singh>>>>

Avesh Khan 3 overs 47. If he’s leaking these runs on West Indian wickets what’s going to happen on flat Australian ones? Clearly a liability. Happy for him to be part of plans, but not the World Cup #WIvsIND #WIvsIND

Suryakumar Yadav’s batting exploits led India to a seven wickets win over West Indies in the third T20I. He slammed 76 runs off 44 deliveries, including eight boundaries and four sixes. India chased down 165 runs in 19 overs. Earlier in the match, Bhuvneshwar Kumar took a couple of wickets to restrict West Indies.

India now has a lead of 2-1 in the five-match T20I series. The fourth T20I will take place on Saturday, August 6 at the Central Broward Regional Park Stadium Turf Ground in Florida.