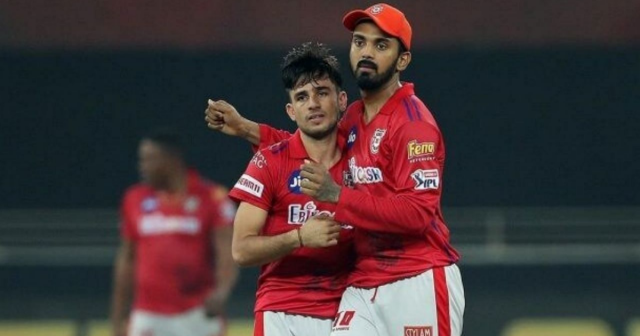 Indian batter KL Rahul would be leading the Lucknow Super Giants in IPL 2022. Ahead of the mega-auction, the Lucknow skipper has showered praise on 21-year old Ravi Bishnoi, who is one of the three draft picks of the franchise. Bishnoi has been acquired by the franchise at a price of Rs 4 crores.

KL Rahul lauded Bishnoi for his fighting spirit. “He [Bishnoi] has a lot of fight in him.”, Rahul said in an interview with Times of India.

KL who has captained Bishnoi in the past, also added that the pressure of an IPL game has never really affected the youngster’s performances. “IPL is a big stage and it didn’t seem like the occasion got the better of him”, Rahul said.

KL also said that the leggie isn’t afraid of bowling to big players and this self-belief has helped him excel at the big stage. He recalled how when once, Bishnoi was asked to bowl against the Rishabh Pant-Shreyas Iyer duo. KL said that Bishnoi was super-confident of getting them out.

“He was bowling against Rishabh Pant and Shreyas Iyer and they are really good players of spin, so I threw him the ball and said, “This is gonna be tough.” He said, “No, it doesn’t matter, I’ll get them out.”, KL added.

Rahul also went on to say that Bishnoi has the potential to become the next superstar of Indian cricket. He stated it’s the responsibility of the Team management now to help Bishnoi open doors of international cricket.

“He can be the next big thing in Indian cricket. The responsibility is on us to help him discover his potential so he can get into that national team and become one of the key spinners for Team India”, KL said.