Prithvi Shaw recently posted two diverge Instagram stories, within 9 hours, on Thursday (June 16). The 22-year-old firstly shared a quote with a picture of Shirdi Sai Baba. The quote read- “Don’t give up, your miracle is on the way.” 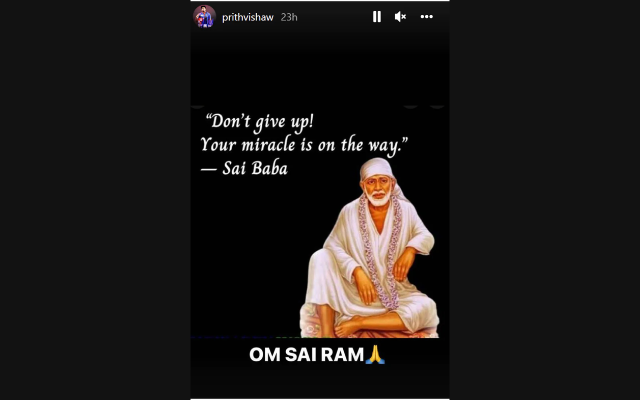 The selectors’ committee of the Board for Control of Cricket in India (BCCI) announced India’s squad for the two-match T20I series in Ireland, on Wednesday evening, June 15, and Shaw, not being considered for the tour may have something to do with the story. The 17-member squad will depart for Ireland with openers Ishan Kishan and Ruturaj Gaikwad in it.

Shaw certainly didn’t have an ideal Indian Premier League (IPL) season this year, as the Delhi Capitals (DC) opener managed to score 283 runs in 10 innings, at an average of 28.30 and a strike rate of 152.97, across the tournament. The best of Shaw was 61 runs in 34 deliveries, against Lucknow Super Giants.

Currently, Shaw is leading his home team Mumbai, in Ranji Trophy 2021-22 season. Shaw and co. are in the semi-finals, playing for a spot in the finals.

In the second innings of Mumbai, Shaw with Yashasvi Jaiswal built a 66-run partnership. Surprisingly, Jaiswal didn’t score a run in this partnership. Shaw scored 64 runs in 71 deliveries, while the other two were extras.

Jaiswal finally added runs in his account, as the left-hand batter hit the UP pacer Ankit Rajpoot for a boundary on the 54th ball of his innings. The whole Mumbai dugout stood up and applauded the 20-year-old. Some of the UP players also joined in. Jaiswal too raised the bat, thanking his fellow cricketers.

To troll his teammate sarcastically, Shaw shared an Avengers meme, via his Instagram story. Despite the slowest start one can ever imagine, Jaiswal went on to play a fabulous knock of 181 runs in the secomd innings. Mumbai is leading by more than 650 runs after a ton from Armaan Jaffer and a half-century from Shaw. 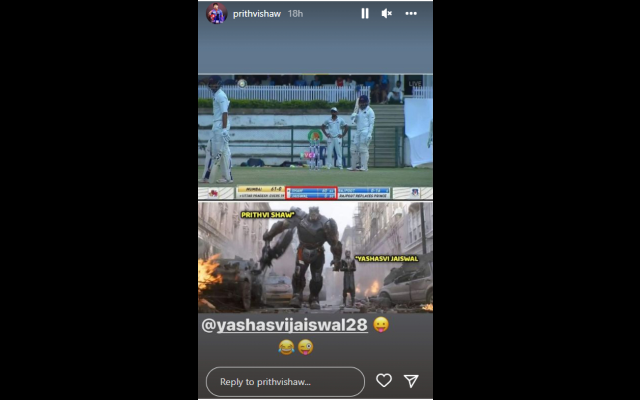