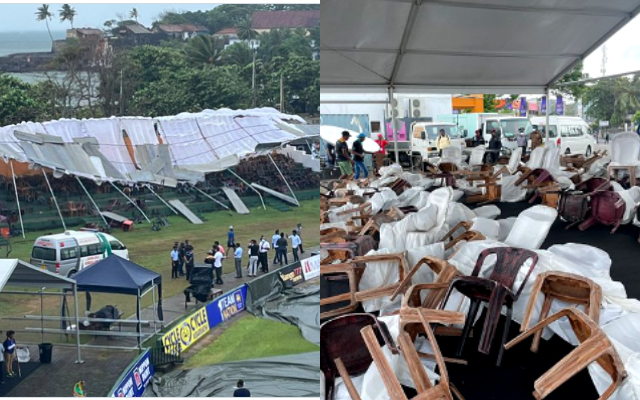 Australia and Sri Lanka are facing each other in the first test match at Galle International stadium. This is a crucial test series for Australia for their chances of making it into the World Test Championship final. It would be a challenge for the Australian team to tackle the spinning pitches of Srilanka.

The start of the second day of the first test match at Galle was delayed due to heavy rain. It caused heavy damage to the Galle Stadium. The roof of the makeshift ground stand collapsed due to heavy rain. However there were no spectators present in the stand at that time.

The heavy rain started almost 90 minutes Before the scheduled start of the play. According to a report published by the Australian press, ground staff covered the entire ground with covers. But the metal sheets blew off. Ground staff did a great job repairing the damaged areas of the ground.

The grand stand for the complimentary ticket holders has just completely collapsed due to the scarily heavy wind this morning in Galle. Stressful times for the organisers as they look to find some temporary seating for them #SLvAus pic.twitter.com/ghQSeOtear

The weather is so intense here at Galle that a small enclosure/stand has just collapsed. #SLvAUS pic.twitter.com/uBkzKONxBP

Usman Khawaja played a great knock of 71 runs in reply to the total of 212 runs scored by Srilanka in the first innings. Khawaja and David Warner played with a proactive approach while opening the innings. They took on Sri Lankan spinners brilliantly. However, Warner couldn’t make it big and was dismissed on 25 runs.

Nathan Lyon picks up a Fifer

Marnus Labuschagne continued his bad form in the subcontinent conditions. Labuschagne threw away his wicket at the score of 13 runs. Steven Smith was dismissed in an unfortunate manner. He was run out on 6 runs after a misunderstanding with Usman Khawaja.