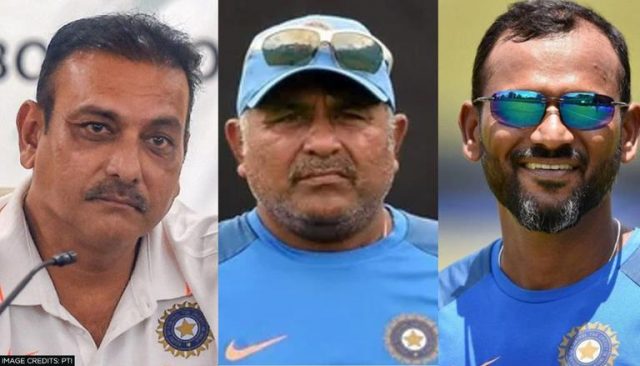 Team India head coach Ravi Shastri, bowling coach Bharat Arun and fielding coach R Sridhar have all been tested positive in their RT-PCR tests for COVID-19. While they all are in isolation, they can only come out after returning two negative results.

With this, they will miss the fifth and final Test against England in Manchester which is set to be played from September 10 to 14. While speaking to ANI, sources related to the developments confirmed that they have returned positive results to their RT-PCR tests as well.

“Unfortunately, their RT-PCR test results are positive and they will all need to undergo isolation and can come out only after returning two negative results,” the source said.

Incidentally, all three including Ravi Shastri, Bharat Arun, and R Sridhar will not be available for the 5th and final Test match, scheduled to take place in Manchester, starting September 10.

Meanwhile, just before the start of play on Day 4, the BCCI informed that Ravi Shastri, Bharat Arun, Sridhar, and physio Nitin Patel are in isolation as a precautionary measure after Shastri’s lateral flow test returned positive recently.

“Of course we are missing Ravi (Shastri) Bhai” – Vikram Rathour

However, all the other members of the team had to undergo two Lateral Flow Tests – one on Saturday night and another on Sunday morning as well. And, after returning negative COVID reports, they were allowed to take part on Day 4 of the ongoing fourth Test at The Oval.

“Of course, we are missing Ravi bhai massively. Ravi bhai, Bharat Arun, and R Sridhar have been an extremely important part of this setup, they have done well in the past five-six years and they have played a major role in the team doing well. This is what it is, they are not here. In the morning, it was a bit of a distraction, we had a word and we decided we need to focus on the cricket. We are here for this series, and I think the boys did well to not get distracted. There was a potential we could have been distracted, the credit needs to go to the boys for the way they handled themselves,” said Vikram Rathour during a virtual press conference on Sunday.

“Ravi bhai felt ill on Saturday night around 8 PM. He was having a little bit of discomfort yesterday, the medical team decided to go for a lateral flow test and it came out positive and that is when we all found that he is positive. The close contacts were identified and isolated so we will wait for the medical team to tell us when they can join back,” he concluded.