Indian spinner Ravichandran Ashwin has reacted to a post by Bangladesh Cricket Board which has gone terribly wrong in their attempt to wish former cricketer Manjural Islam Rana. BCB’s attempt to pay homage to the former cricket misfired in the way they posted about his 37th birthday. Seeing the post, Ashwin reacted to it and blasted the BCB for the way, they wished him on his 37th birthday.

On Tuesday, the official Twitter handle of the apex Bangladesh cricket board shared a post to mark the 37th birth anniversary of the late cricketer. The BCB highlighted the fact that Manjural was the youngest Test Cricketer to die in the same post. “Happy Birthday to Manjural Islam Rana, youngest Test Cricketer to die at the age 22 years and 316 days,” the BCB said in the tweet. 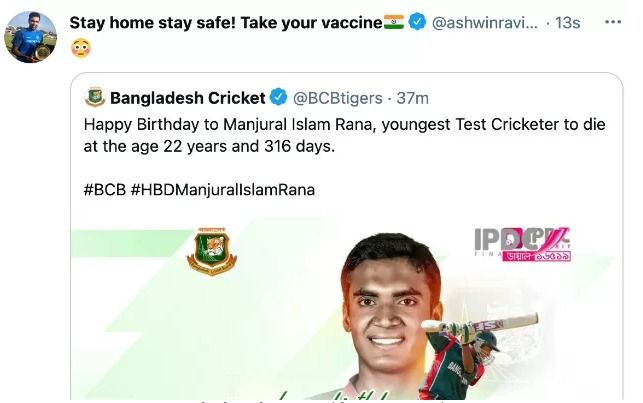 The tweet triggered an immediate response from Ravichandran Ashwin who replied with an emoticon. while reacting to the tweet. After courting controversy over the tweet, the BCB have reportedly taken down the post and the official Twitter handle has also shared a new post to celebrate the life of the former Bangladeshi cricketer. “Happy Birthday to Manjural Islam Rana. One of the Greatest Tiger we ever had,” the BCB tweeted in a new post.

Happy Birthday to Manjural Islam Rana. One of the Greatest Tiger we ever had. #BCB #HBDManjuralIslamRana pic.twitter.com/tebMCvUwK4

Meanwhile, the veteran Indian spinner left the IPL 2021 midway for Delhi Capitals to be with his family during these tough times. Meanwhile, the BCCI finally decided to suspend the IPL indefinitely after players from a few team camps tested COVID positive.

The IPL finally announced the decision to postpone the IPL at noon earlier today along with a statement. A total of 29 games were played till the IPL was postponed. Delhi Capitals with 12 points topped the points table while Sunrisers Hyderabad were languishing at the bottom.