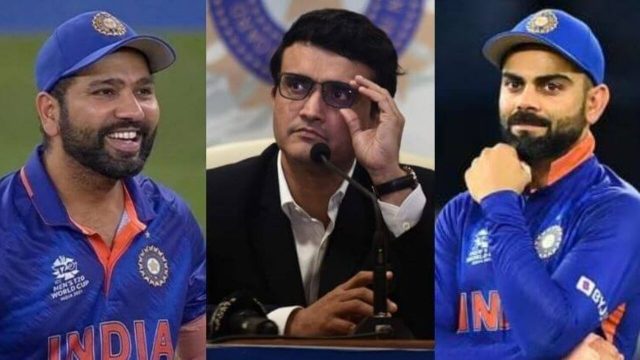 The BCCI earlier this week confirmed Rohit Sharma’s Appointment s India’s next ODI skipper. Rohit, who was earlier named the T20I skipper will also lead the ODI side as well. The ODI series against South Africa will be his first assignment as full-time white-ball skipper.

Talking to New 18 Sourav Ganguly revealed the reasons behind appointing Rohit Sharma as the next ODI skipper of the side. The BCCI, selectors and Ganguly himself was criticised for casking Virat Kohli as India’s ODI skipper despite his good numbers. Kohli’s childhood coach said that the BCCI and the selectors lacked clarity and explanation regarding the call they took.

“Of course. That’s why the selectors have backed him (on whether he is hopeful of Rohit leading the squad successfully). He will find a way to do well and I hope he does,” Ganguly told News18. “His record for IPL (Mumbai Indians) is phenomenal… winning five titles. He captained India in Asia Cup a couple of years ago which India won as well, and India won without Kohli. To win a title without him spoke volumes of that team’s strength. So he has had success in big tournaments. He has a good team. So hopefully they can all turn it around,” the BCCI President said.

After Rohit’s appointment as the next ODI skipper. Ganguly said that the call was made by the selectors and not by him alone.

“It’s a call that the BCCI and the selectors took together. Actually, the BCCI had requested Virat to not step down as the T20I skipper but obviously, he did not agree. And the selectors then did not feel it right to have two different captains for two white-ball formats,” Ganguly said as quoted by ANI.